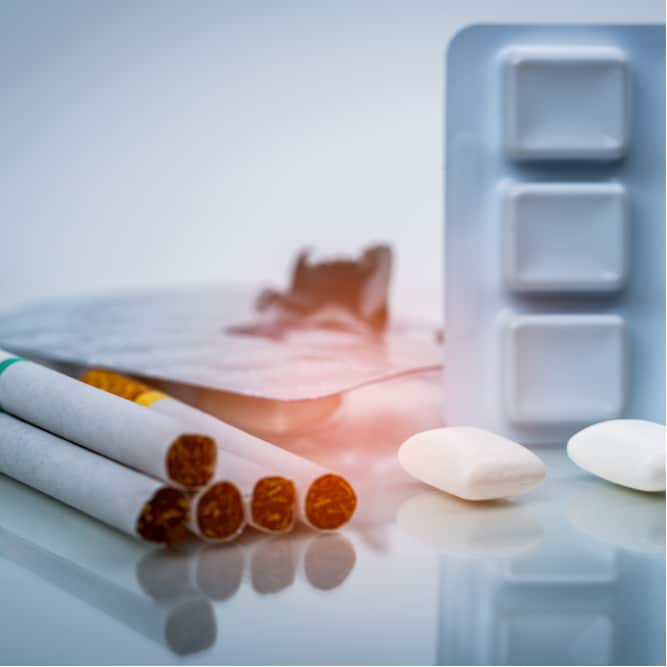 Nicotine is the main compound that makes cigarettes addictive. It works by increasing dopamine levels in the brain, which results in a euphoric sensation, a better mood, and more alertness. When we speak of addictions such as tobacco addiction or vape addiction, we are actually referring to an addiction to nicotine. Almost all drugs that trigger a dopamine increase are habit-forming, and nicotine is absolutely no exception.

Nicotine is extremely addictive, and its effects can lead to serious health problems. The health concerns of tobacco products are very well-known. E-cigarettes, which are a newer product, have less-known health concerns, but new research does suggest that they can cause serious lung problems. Since vapes are most common among kids, teenagers, and young adults, this is very disturbing news.

How Addictive is Nicotine?

Nicotine has been called one of the most addictive substances on the planet. The health problems associated with cigarettes and other tobacco products are well-known across the world, yet people continue to use the products. More often than not, nicotine addiction is to blame when someone continues to smoke despite knowing the consequences.

Nicotine is so habit-forming that using it just one time could lead to a full-blown addiction. One study suggested that more than two out of every three people who try nicotine will become addicted. This statistic shows just how serious the consequences can be when young people try cigarette smoking or vaping for the first time.

While the symptoms of nicotine withdrawal aren’t usually dangerous, they can be very uncomfortable and make it difficult to quit. Products such as nicotine patches and nicotine gum can be used to help a smoker wean off of the substance, and make withdrawal easier. Complete smoking cessation, or quitting ‘cold-turkey’, will usually result in a worse withdrawal period.

What are the Effects of Nicotine?

It is hard to separate the effects of nicotine from the effects of the other compounds found in tobacco products and e-cigarettes. These products can cause a myriad of health issues, from elevated blood pressure or heart rate to lung failure. Common short-term side effects of products that contain nicotine are:

The long term health problems resulting from the use of nicotine products are so numerous and extreme that it would take an entirely separate article to cover them. From pregnancy troubles to heart disease, to liver and kidney failure, to intense mental health issues like depression and anxiety, using nicotine products can kill you in many different ways.

Is it Possible to Overdose on Nicotine?

Those who suffer from a nicotine overdose usually make a full recovery, but the situation should be treated as an emergency. Nicotine overdose can also be a signal that someone’s addiction has gotten out of hand. Since tolerance increases as a person continue to use the drug, the likelihood of overdose also increases. Sometimes a nicotine overdose is what triggers an addict to finally seek the treatment they need.

Who Can Become Addicted to Nicotine?

People of all ages and from all demographics can become addicted to nicotine. Overall, however, young people are the most likely to use products that contain the drug. Before e-cigarettes began to gain popularity in recent years, young adults were already the most likely age group to smoke.

Just as smoking rates began to decline in young people, e-cigs became popular. In 2017, nearly 20 percent of high school seniors reported ‘vaping’ regularly. The trend has only gotten worse since then, but some cities are cracking down. In 2019, San Francisco became the first city to ban all sales of e-cigarettes, including online purchases. This was done as an effort to address the epidemic of vaping among young adults and teenagers.

E-cigs were first used as a method of helping users to stop smoking. Similar to a nicotine patch, the idea was to help smokers wean off cigarettes while avoiding the harmful chemicals in tobacco smoke. This has backfired however because now teens and young people are being introduced to nicotine through the use of these products. E-cigs are now a gateway nicotine product, rather than a device used to help users quit smoking.

Because the brains of teens are still developing, they are more at risk to develop long-term health problems from nicotine use. It also makes them more likely to become addicted to nicotine products such as regular cigarettes or e-cigs.

Both medications and behavioral therapies can help users quit smoking, vaping, or otherwise using nicotine. Quitting cold-turkey without any support is possible, but success rates using this approach are low. Withdrawal symptoms, coupled with triggers to smoke, make this addiction too difficult to tackle without help.

Treatment centers are the best place to find nicotine addiction treatment. Here, users will be stabilized using nicotine replacement therapy    (NRT). These treatments use products like patches and gums to wean users off of nicotine, making withdrawal easier and cravings less severe.

Nicotine replacement therapy can be combined with behavioral therapy to create a holistic treatment plan. Nicotine addiction is unique in that the drug is legal, widely available, and relatively socially acceptable to use throughout the day. Use of the drug can become such a part of someone’s daily routine that it takes many therapy sessions to break the habit of addiction.

In extreme cases, users may have to make major life changes such as moving to a new home or switching jobs, just in order to remove their triggers to use nicotine products. While these cases are rare, it is always worth it to take the necessary steps in order to become nicotine-free. Products containing nicotine are responsible for more than 480,000 deaths in the United States each year. Quitting is the only way to ensure you will not become part of this statistic.

If you or someone you know is addicted to nicotine products, call a treatment center today. It may not be too late to reverse the awful health effects of this drug and to start living a healthier life.