Rainbow fentanyl, a new version of the potent opioid, has made its way to over 18 states in the U.S. Similar to candy, it’s brightly colored. Drug cartels primarily manufacture this form of fentanyl for children, teens, and young adults who will associate it with sweets. 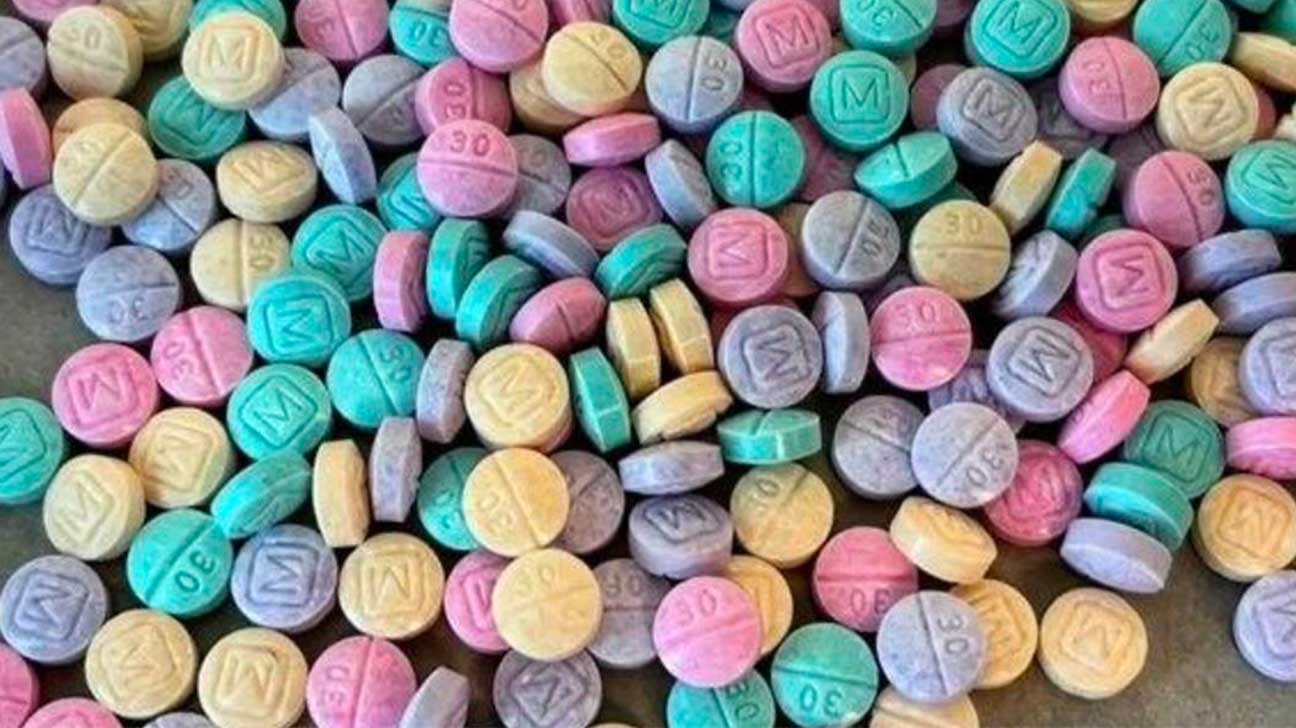 The wide availability of opioids, especially fentanyl, has led to severe opioid addiction and a drug overdose epidemic in America.

A recent report published by the Substance Abuse and Mental Health Services Administration (SAMHSA) stated there were over 100,000 drug overdose deaths in 2021.

Of these deaths, many were related to fentanyl abuse. Next to heroin, fentanyl is one of the most abused drugs today. It’s a highly potent substance that offers pain relief and euphoria.

Drug cartels have manufactured a new type of fentanyl aimed toward younger consumers. It’s called “rainbow fentanyl” and has been seized in many states.

Below we’ll explore what rainbow fentanyl is and the dangers it carries.

What Is Rainbow Fentanyl?

Rainbow fentanyl is a new form of illegally manufactured fentanyl that’s spread to many states. This type of fentanyl is coated in bright colors, such as pink, purple, and yellow.

Cartels have made this new colorful form of the dangerous opioid drug to attract newer and younger customers.

Usually, fentanyl is sold as blue or white pills. But rainbow fentanyl is visually appealing, resembling candies such as Skittles or Sprees.

Like other forms of fentanyl, rainbow fentanyl is sold in pill and powder form. It can be injected, snorted, smoked, or inhaled.

People new to drug use may view the colorful pills as no more harmful than a piece of candy. It can make people more comfortable experimenting with the dangerous substance.

Where Is Rainbow Fentanyl Being Abused?

According to the Drug Enforcement Agency (DEA), rainbow fentanyl has been found in over 18 states.

Some states with rainbow fentanyl seizures:

Law enforcement from states that haven’t witnessed rainbow fentanyl say it’s inevitable that the drug will make its way to their streets.

Large shipments of rainbow fentanyl have been seized at the Mexi-Cali border and ports in major cities.

The DEA claims Mexican cartels are responsible for smuggling all types of illegal fentanyl, including rainbow fentanyl, into the United States.

Is Rainbow Fentanyl A Real Threat?

Like any form of fentanyl, even prescription types, addiction grows quickly. Fentanyl is part of the opioid drug family with heroin, morphine, and codeine.

These drugs create a rush of euphoria, pain relief, and extreme relaxation. People high on opioids may fall in and out of consciousness for hours.

The difference between fentanyl and its opioid counterparts is that fentanyl is much more potent. For example, fentanyl is 50 times more powerful than heroin and 100 times than morphine.

A small amount of fentanyl can be deadly. Many unfamiliar with fentanyl or opioids may misuse this drug and overdose.

When fentanyl is presented as colorful and visually striking, people, especially younger people, may look past the potential dangers and be more inclined to try out the substance.

Children, teenagers, and young adults may connotate the colorful chalk-like drug with candy, leading them to ingest a fatal amount. The “fun” in taking something colorful can also perpetuate addiction.

What Are The Risks Of Using Rainbow Fentanyl?

Though rainbow fentanyl is no more addictive than regular fentanyl, it poses many risks.

Aside from addiction and overdose, there are several psychological and physical side effects of fentanyl abuse. These effects can turn into long-term problems.

Some of the risks of rainbow fentanyl are:

Get Help For Fentanyl Addiction

If you or a loved one have developed an addiction to rainbow fentanyl or any form of fentanyl, our Massachusetts drug rehab center can help you to recover.

Learn more about our facility by speaking to one of our drug specialists today.