Skin-popping is a term used to describe the injection of drugs like heroin into the skin. Injecting heroin is a form of drug abuse and can be a sign of heroin addiction. Treatment for heroin addiction is available. 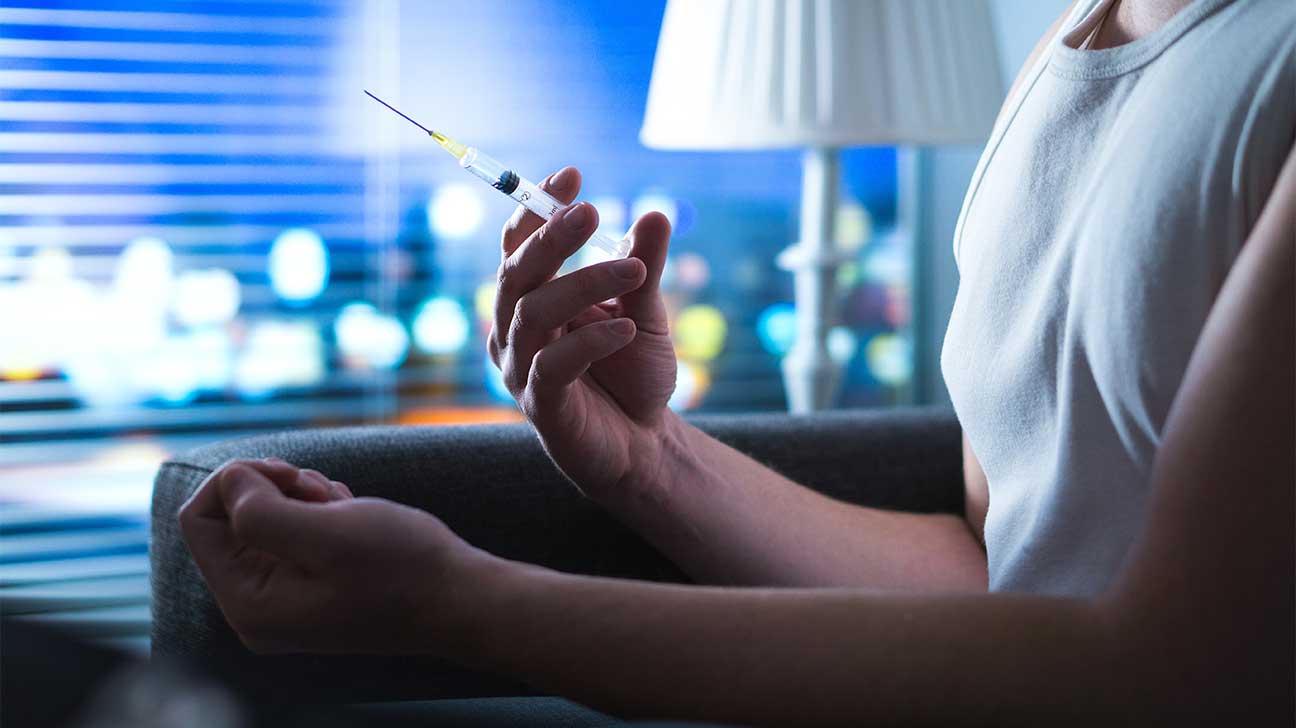 According to an annual survey from the Substance Abuse and Mental Health Services Administration (SAMHSA), about 745,000 people in the United States used heroin in 2019.

Heroin is an addictive, illegal opiate drug that can be injected, smoked, sniffed, or snorted. The effects of heroin use, and how fast you feel those effects, can depend on how heroin enters your body.

One method for using heroin is “skin-popping,” a form of drug injection that can cause a host of harmful effects on physical and mental health.

What Is Skin Popping?

The term “skin popping” refers to a method of drug injection. Specifically, this is when drugs are injected between the skin and fat just below the surface, or into the tissue layers. This is known as intradermal injection and subcutaneous injection, respectively.

These are only two forms of drug injection. Illicit drugs like black tar heroin can also be injected directly into the veins—a method known as intravenous injection—or through intramuscular injection (“muscling”).

In addition to heroin, other drugs that can be injected this way include:

Skin popping is different from other forms of drug injection in a couple of ways. First, injecting drugs intradermally or subcutaneously is one way to avoid injecting chemicals directly into your veins, which can cause an immediate rush of pleasure and relaxation.

Compared to intravenous injection, which can lead to drug effects almost immediately, injecting under the skin or into a muscle does not cause effects as quickly. Drug absorption is slower when injecting into the skin, and effects may last longer. This also decreases the likelihood of overdose.

Unfortunately, injecting heroin this way can still cause a range of harmful effects, from permanent scarring to wound botulism and other serious infections.

Injecting heroin can be very dangerous and carries several physical and psychological health risks. Skin popping heroin can allow germs to sit inside fat tissue or under the skin, which can cause infections, abscesses, scarring, and other potentially life-threatening illnesses.

If you know someone who injects heroin, it may be helpful to understand the dangers of skin-popping heroin and warning signs.

One of the worst dangers associated with skin popping is wound botulism. This is a serious type of infection that can develop among heroin users when a germ known as clostridium botulinum gets into a wound. This germ, which can be found in contaminated drugs, can then develop into a toxin that may attack the body’s nerves.

According to the Centers for Disease Control and Prevention (CDC), injecting drugs like black tar heroin is a risk factor for this rare but life-threatening illness.

Injecting drugs with heroin carries a high risk for certain blood-borne and skin infections, especially if you’re sharing needles or syringes with other injecting drug users.

Infections associated with skin-popping heroin include:

Some of these infections, including HIV and endocarditis, a heart valve infection, can be deadly in patients without proper treatment. Injecting heroin under the skin or into the muscle or fat tissue doesn’t lessen your risk for these infections.

Injecting too much heroin or mixing it with other drugs can lead to a drug overdose. Heroin overdose kills thousands of people across the United States each year.

While injecting heroin into a vein carries a higher risk for overdose than skin popping, any method of heroin use that introduces too much heroin (or a mixture of drugs) into your system at one time can cause life-threatening consequences.

If you or someone you know is experiencing symptoms of overdose—such as falling in and out of consciousness, seizing, clammy skin, or very slow breathing—call 911 right away. Overdose can be reversible when treated quickly with Narcan, or naloxone.

While not always deadly, the injection of drugs like heroin subcutaneously or into a muscle can cause long-term scarring, cellulitis (hyperpigmentation), and cutaneous lesions.

Adulterants such as flour, lactose, and baking powder may also serve as irritants when cut and injected with heroin. Depending on the injection site, scarring may show up on the hands, fingers, wrists, lower extremities, and forearms.

Injecting heroin into the skin can lead to addiction over time. Heroin addiction can be physical and psychological in nature. This can make it difficult to stop using heroin and may require medical and behavioral interventions such as detox, behavioral therapy, and medication.

What To Do If A Loved One Is Skin Popping Heroin

Thousands of adults in the United States seek treatment for heroin abuse each year. Heroin can be highly addictive and cause significant harm to physical, mental, and emotional health.

It’s never too soon to seek help. If you suspect someone you know is injecting heroin, consider talking to a doctor about scheduling a drug abuse evaluation. Heroin abuse and addiction is treatable. Overcoming an addiction to heroin may require multiple levels of care, including detox and inpatient rehab.

Spring Hill offers residential rehab and intensive outpatient treatment programs for heroin abuse and addiction. If you or a loved one is injecting heroin, call us today to schedule a free drug abuse evaluation and learn more about our leading addiction recovery programs.