Alcohol and cocaine are dangerous enough when abused independently. When abused simultaneously, the risks and consequences are even more damaging and life-threatening. 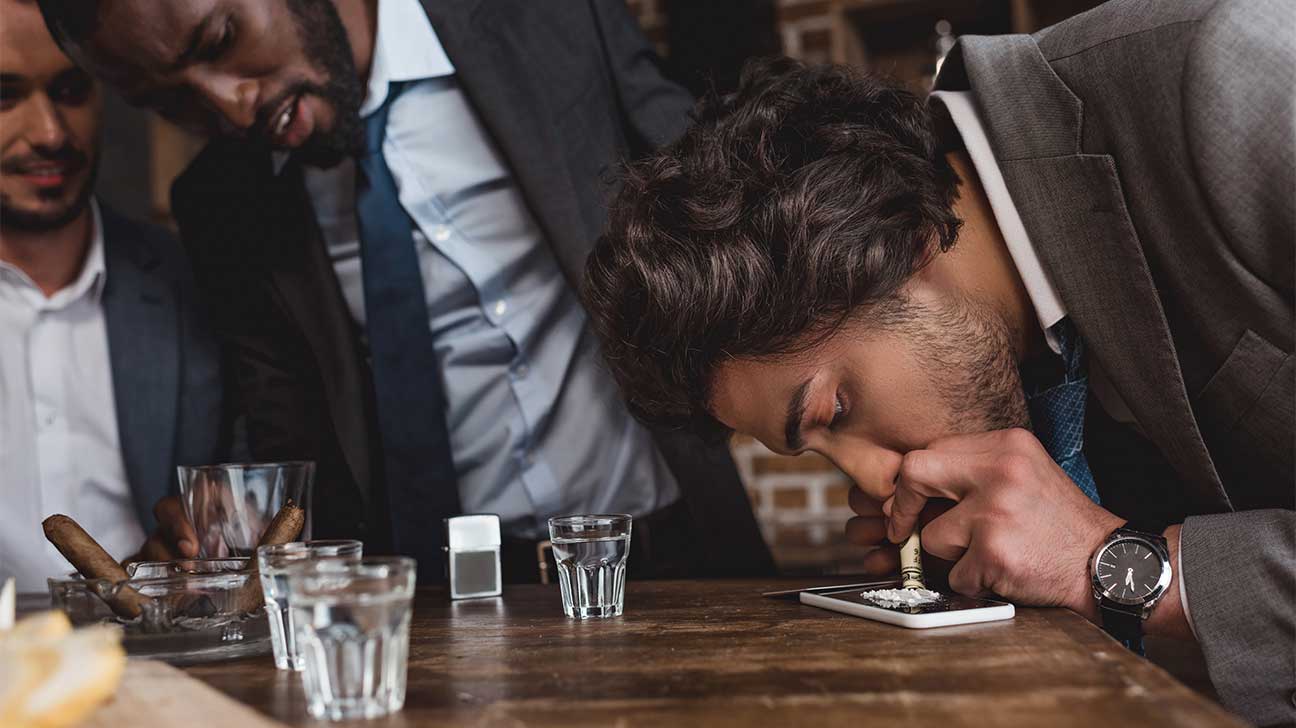 Mixing cocaine and alcohol is an example of polysubstance use, which is the recreational use or chronic abuse of more than one mind-altering substance at a time.

Polysubstance use can be unintentional or intentional. The combined abuse of cocaine and alcohol is often a deliberate choice and can be a red flag for a substance abuse disorder.

People who are affected by alcoholism, cocaine addiction, or both may abuse them simultaneously to moderate or amplify the individual effects of these substances.

The physical and mental effects of cocaine and alcohol are completely opposite in nature. The combined effects are increasingly hazardous and can jeopardize health in lethal ways.

Paradoxical Effects Of Cocaine And Alcohol

Cocaine and alcohol are two of the most commonly abused drugs in the U.S.

A key difference between them is that cocaine is an illegal stimulant drug and alcohol is a legal depressant drug. Cocaine speeds bodily functions, while alcohol slows processes down.

While cocaine circulates illegal drug markets and alcohol is legally accessible, they both have the potential to cause physical harm and dangerous behavioral changes.

Side Effects Of Cocaine

Cocaine has a stimulatory effect that accelerates mental processes and bodily functions. This is reflected by behavioral and physiological changes that are symptomatic of cocaine use.

These polarized levels of dopamine cause extreme imbalances in the brain’s reward system.

As a result, the mind loses the ability to produce dopamine naturally. It becomes dependent on cocaine to experience pleasure and happiness, which increases the risk of depression.

The neurological effects of cocaine can also cause:

As a result of how cocaine affects the central nervous system, there are certain physical effects caused by the active presence of cocaine in the system.

Short-term physical side effects and symptoms of cocaine abuse can worsen as addiction progresses and become long-term health issues.

Side Effects Of Alcohol

Alcohol is a depressant and psychoactive drug that affects the central nervous system by slowing down brain function, while also increasing dopamine and stimulating other functions.

With excessive alcohol consumption such as with binge-drinking, alcohol becomes toxic to the body and can cause extensive damage to vital organs, especially the brain and the liver.

Since alcohol has both depressing and stimulating effects, it can produce a range of neurological effects depending on the amount consumed and what it is mixed with.

When used in moderation, alcohol can have mood-boosting effects and induce mild euphoria. With excessive alcohol consumption, there is an increased risk of alcohol poisoning.

Alcohol poisoning and intoxication can have adverse neurological effects such as:

The combination of alcohol abuse and stimulant drug abuse can increase health complications and the likelihood of blackouts, short-term memory loss, and other cerebral damage.

At toxic levels, alcohol causes a variety of reactions in the body that indicate alcohol poisoning and internal damage caused by prolonged alcohol abuse.

Common physical reactions and negative effects of alcohol abuse include:

In severe cases of alcohol addiction, alcohol detox and withdrawal can also be life-threatening, and withdrawal symptoms need to be medically monitored to prevent sudden death.

Some people may rationalize that since cocaine can reverse the drowsiness caused by alcohol, and alcohol can repress the jitteriness caused by cocaine, together they cancel each other out.

However, there are some critical risks to be aware of that are caused by cocaethylene, the metabolite created in the combined presence of cocaine and alcohol.

Cocaethylene is the ethyl homolog of cocaine when it is metabolized by the liver. Is so toxic that it cannot be excreted, and remains in the system for much longer than cocaine or alcohol.

The physical health risks and short-term side effects caused by cocaethylene can cause major health problems, permanent damage, and sudden death.

Some of the significant physical health risks of mixing alcohol and cocaine are:

The combined use of cocaine and alcohol also increases cravings, so someone who is under the influence of both is likely to consume more of each once they’re intoxicated.

Both cocaine and cocaethylene spike dopamine and serotonin levels, causing:

Some people may not even realize how dangerous the combination of alcohol and cocaine is to their health and safety, and the safety of those around them.

Mixing cocaine and alcohol have severe consequences, including brain damage, heart attacks, strokes, and cancer. It also greatly increases the risk of a potentially fatal overdose.

The production of cocaethylene caused by the combination of cocaine and alcohol has extremely toxic effects on the brain, and can result in permanent damage or sudden death.

Getting Treatment For Alcohol Or Cocaine Addiction

Alcohol and cocaine addiction are common co-occurring disorders and are often treated simultaneously at treatment centers that specialize in dual diagnoses.

Support a loved one’s recovery by encouraging them to learn more about the treatment process and the levels of addiction care available to help them conquer their addiction.

Call the helpline at Spring Hill Recovery Center to learn more about treatment options and services that can help your loved one start their recovery journey.