What Is Crystal Meth? Everything You Need To Know

Crystal meth is a pure form of methamphetamine that is highly addictive. It became popular in the U.S. in the 1990s and is seeing a resurgence. Side effects of crystal meth use include increased heart rate, anxiety, paranoia, and risk of overdose. 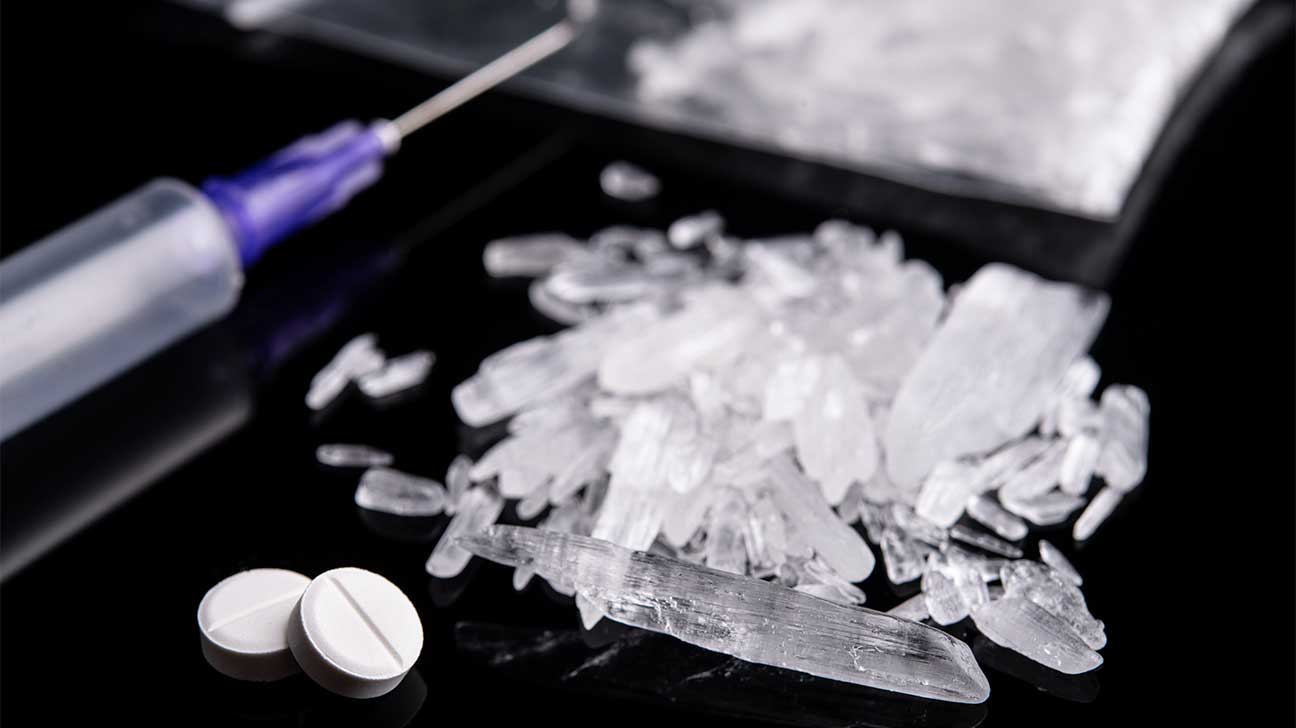 It produces a euphoric high, which can lead to cravings for the drug and repetitive use to maintain the high, sometimes called a “run.”

Crystal meth has several serious side effects, some of which aren’t reversible with discontinued use of the drug. Meth abuse and fatal overdoses are on the rise in the U.S.

There are many distinct properties of crystal meth that can help identify the drug, including how it looks, tastes, and smells.

The easiest way to identify crystal meth is usually by its appearance.

Crystal meth looks like shiny clear-white or white-bluish crystals or shards of glass, which is how it gets its name. It has a flaky texture.

Crystal meth is typically smoked or snorted. These uses might produce a salty, sweet, or bitter taste, depending on whether flavoring was added.

The production of crystal meth involves household or agricultural chemicals. A chemical scent could be present where it is being manufactured.

Crystal meth itself is odorless. When it is smoked, some of the chemicals are released, creating a strong scent.

The body odor of someone who is using meth may have a chemical scent, as chemicals are being released through the skin.

How Is Crystal Meth Used?

Crystal meth chunks are usually smoked in a glass pipe. If crushed into a powder, it can also be snorted or even eaten.

Although crystal meth is rarely injected, it is possible. The powdered form is first dissolved in water or alcohol.

Injecting crystal meth comes with added dangers, including the risk of HIV, hepatitis C, and other infections. Injection equipment other than syringes can spread these infections.

How Is Crystal Meth Made?

Crystal meth is made from methamphetamine that is either smuggled into the United States or made from over-the-counter ingredients in a meth lab.

This mostly includes the decongestants ephedrine and pseudoephedrine, which is why the amount of these cold medicines that you can buy has been limited since 2006.

These ingredients are then “cooked” with a solvent, usually found in household chemicals, until crystals form.

The Origins Of Crystal Meth

It was used by World War II soldiers to increase alertness. Its use in America dates back to the ’50s and ’60s when it was prescribed for obesity and depression.

Due to the drug’s abuse, methamphetamine was made a Schedule II substance in 1970. Crystal meth’s use in America began later, in the 1980s.

When Was Crystal Meth First Made?

It is unclear when crystal meth was first made.

The National Drug Intelligence Center reports that it was first distributed in Hawaii and the West Coast by Asian criminal groups, then later made by Mexican drug traffickers.

Pseudoephedrine was used to make meth starting in the ’90s when it became more difficult to get ephedrine. Meth use skyrocketed during this time.

The Combat Methamphetamine Epidemic Act was passed into law in 2006, regulating the sale of ephedrine- and pseudoephedrine-containing medications in the U.S.

However, drug use continued to climb. Between 2012 and 2017, meth seizures along the U.S.’s southwest border rose 255%, indicative of the drug’s import from Mexico.

Other Names For Crystal Meth

Slang terms may be used to obscure crystal methamphetamine use from loved ones, or to evade law enforcement.

Street names for crystal meth include:

How A Crystal Meth High Feels

Like other stimulant drugs, a crystal meth high produces feelings of euphoria, alertness, and increased energy.

According to the Government of Maine’s Meth Toolkit, the high is similar to that of cocaine but longer-lasting.

Feelings of euphoria result from meth’s release of unnaturally high amounts of dopamine in the brain, including in the reward center.

This is one reason why using crystal meth produces drug-seeking behavior, which can turn into severe physiological and psychological dependence.

Some of the short-term effects of crystal meth use include:

Crystal meth use also comes with long-term effects, some of which aren’t reversible when drug use is stopped.

Some of these can occur even with first-time use of crystal meth, largely due to not knowing the drug’s ingredients and purity.

The synthetic opioid fentanyl is a particularly dangerous additive to many illicit drugs, including meth.

Long-term effects of methamphetamine abuse include:

There are also withdrawal effects that often come with crystal meth detox.

Here are some of crystal meth’s withdrawal symptoms:

The Difference Between Crystal Meth And Methamphetamine

“Crystal meth” and “meth” are often used interchangeably. However, these are two different forms of a drug with a similar chemical structure, and they’re not the same.

Crystal meth also typically has a crystal-like look. While methamphetamine can appear in a powder or liquid form (when dissolved into water), crystal meth looks like small clear rocks or crystals.

Find answers to some commonly asked questions about crystal meth.

Oregon made the possession of small amounts of methamphetamine legal in 2021, making it the first U.S. state to decriminalize meth.

Some sources claim that meth for personal use is not illegal in Italy, but authorities do keep track of people who use the drug and sometimes mandate rehab.

Where Does Crystal Meth Come From?

Most of the crystal meth in the U.S. today comes from Mexico. Mexican “mega labs” or “super labs” can produce a large amount of high-purity crystal meth quickly.

News outlets like the BBC report that the production of crystal meth in Afghanistan is on the rise. The country is also shipping it to other countries.

It isn’t clear exactly who first made crystal meth. Some sources say Asian criminal groups first made it and distributed it in the U.S. via Hawaii.

How Long Does Crystal Meth Stay In Your System?

According to the National Institute on Drug Abuse, 50% of crystal meth will be out of your system in 12 hours.

How long meth stays in your body depends on various factors, like your metabolism and overall health.

Usually, meth can be detected in blood or saliva for a day or two following use, in urine for a few days, and in hair for up to six months.

How Much Does Crystal Meth Cost?

Learn more about the price of meth on the street.

What Type Of Drug Is Crystal Meth?

Get Help For Crystal Meth Addiction

If you or a loved one is living with substance use disorder, contact us today to get help that is personalized to your unique needs.