Home > Substance Use In Veterans

Many veterans deal with substance abuse due to PTSD, major lifestyle shifts, and difficulties adjusting to civilian life. Alcohol, opioids, and marijuana are some of the most commonly used drugs among veterans. Treatment is available to address veteran-specific addiction care needs. 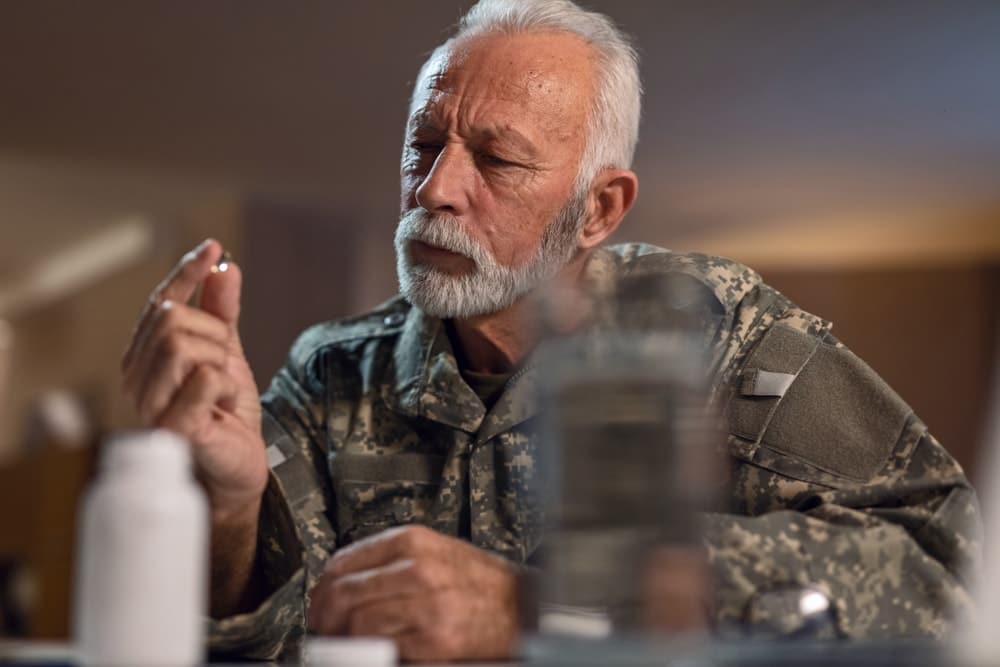 Substance use disorders are common among military veterans.

When veterans receive treatment for addiction, it should address the complex needs of people who have served in the military.

Here you’ll find more information about substance abuse disorders in veterans, which drugs are commonly abused among veterans, and treatment options for addiction.

According to the National Institute On Drug Abuse (NIDA), more than 10% of military veterans in the United States have been diagnosed with a substance use disorder.

While this number is only slightly higher than addiction statistics in the general population, many veterans may remain undiagnosed.

NIDA reports that in one study, half of military members indicated a belief that seeking help for mental illness would negatively impact their careers.

For military members who internalize this stigma, it may be difficult to seek treatment for substance abuse and other mental health concerns after leaving the military.

Furthermore, NIDA explains that among homeless veterans, the rate of substance abuse jumps to 70%.

How Do Substance Use Disorders Affect Veterans?

Veterans face unique challenges, and these challenges may contribute to their risk of developing substance use disorders.

The military provides a high level of structure and routine, and readjusting to civilian life after growing accustomed to structure can be difficult for many veterans.

Some veterans deal with additional stressors such as feeling misunderstood by loved ones and finding new careers.

Furthermore, the military conducts random drug tests and has a zero-tolerance policy for illicit drug use.

Once military members return to civilian life, some may begin using drugs that would not have been available to them while they were on active duty.

Many veterans deal with opioid use disorders as the result of chronic pain after combat injuries.

Opioids are commonly prescribed for severe pain, including pain sustained in combat.

However, these medications are highly addictive and carry a strong risk of physical dependence.

Co-Occurring Disorders For Veterans With Addictions

Addiction and other mental health problems commonly occur alongside one another. Veterans have an especially high risk of certain mental conditions such as PTSD, depression, and anxiety.

Often, substance abuse in veterans occurs when a person self-medicates for their symptoms.

Post-traumatic stress disorder (PTSD) is a group of symptoms that a person may experience after enduring or witnessing a traumatic event.

Not everybody who experiences trauma will develop PTSD. However, those who do develop this condition experience symptoms such as insomnia, flashbacks, nightmares, and hypervigilance.

Depression And Addiction Among Veterans

According to a study on veteran mental health, combat veterans experience high rates of depression.

Depression has a large genetic component, but factors such as trauma and stress can exacerbate it.

Symptoms of clinical depression include intense sadness, lethargy, changes in sleep patterns, and feelings of hopelessness.

Explosions, falls, and similar events can cause trauma to the head, which may result in a traumatic brain injury (TBI).

According to the U.S. Department of Veterans Affairs, the American armed forces experienced more than 375,000 cases of diagnosed TBI over the course of seven years.

TBI symptoms include physical difficulties such as headaches and hearing problems.

However, it can also cause intense irritability. A person with a TBI may become easily frustrated over things that may not have frustrated them under normal circumstances.

While research on whether TBI causes addiction is limited, there is some evidence that TBI contributes to substance abuse in otherwise healthy individuals.

Among veterans and the general population, some drugs are more commonly abused than others.

Differences in drug abuse rates may be caused by drug availability, military attitudes toward specific substances, and desired drug effects.

While illicit drug use is cause for a dishonorable discharge, alcohol use is permitted among military personnel, and factors such as PTSD and risk-taking behaviors may exacerbate the problem.

When a person who deals with alcohol abuse leaves the military, they will carry the disorder with them into civilian life.

Opioid use disorders sometimes begin with a legitimate prescription for pain medication, including medication prescribed for injuries relating to military service.

At the same time, opioids enhance activity in the brain’s reward pathways, releasing calming and pleasurable brain chemicals. Over time, the brain can become dependent on this process.

As a result, some people rely on opioids not just for pain relief but also for feelings of pleasure and relaxation, which can result in prescription drug abuse.

Opioid prescriptions have decreased recently. However, some people with an existing opioid use disorder turn to street opioids, including many forms of heroin, when they no longer have prescription opioids.

While marijuana is far less addictive than many other substances, it is not impossible to develop an addiction to this substance.

Marijuana heightens dopamine production in the brain, and because dopamine is a reward chemical, the resulting pleasurable effects can “teach” the brain to seek more of the drug.

The Substance Abuse and Mental Health Services Administration (SAMHSA) conducted a survey on veteran drug use.

The survey notes that nearly 13% of the veteran population reported using marijuana in 2019. These numbers may increase as public attitudes toward marijuana change.

Marijuana use has a strong correlation with PTSD, and some veterans report using marijuana to relieve symptoms.

However, more research is needed to determine the efficacy of marijuana for symptom relief.

How To Address A Substance Abuse Problem

While drug and alcohol addiction is a difficult mental health disorder, it is possible to recover from substance abuse. Treatment should be tailored based on the person’s individual needs.

Medical detoxification (detox) is an essential treatment process when a person is addicted to opioids, benzodiazepine medications, or any other drug that causes life-threatening withdrawal symptoms.

Detox allows people to taper off of drugs gradually, which minimizes withdrawal and does not shock the system in the same way that quitting “cold turkey” can.

Many drug treatment facilities offer specialized recovery programs for people who have served in the U.S. military.

In inpatient addiction treatment, people stay at the rehab center as they begin their recovery.

Because inpatient care provides a tight schedule, it may work especially well for vets who struggled with the lack of structure after leaving the military.

In outpatient substance abuse treatment, people commute to the treatment center and stay at home when not directly receiving care. Both inpatient and outpatient treatment options provide multiple types of care.

In family therapy, families can receive mental health treatment as a unit. This type of therapy focuses on interpersonal communication.

Family therapy can be beneficial for people with addictions and their loved ones, as it can help family members understand the nature of addiction and how to support each other.

Family therapy can also help service members who feel misunderstood by their loved ones after spending time in the military.

There is a lot of stigma surrounding addiction in the military. As a result, many people do not ask for help.

Many veterans also suffer silently from mental health issues, and again, that increases the risk of alcohol or drug addiction.

However, resources are available for people with addictions, including military members and veterans.

If you or a loved one are a veteran dealing with substance abuse, here are some resources that may help you move forward: