Home > What Is Kratom? 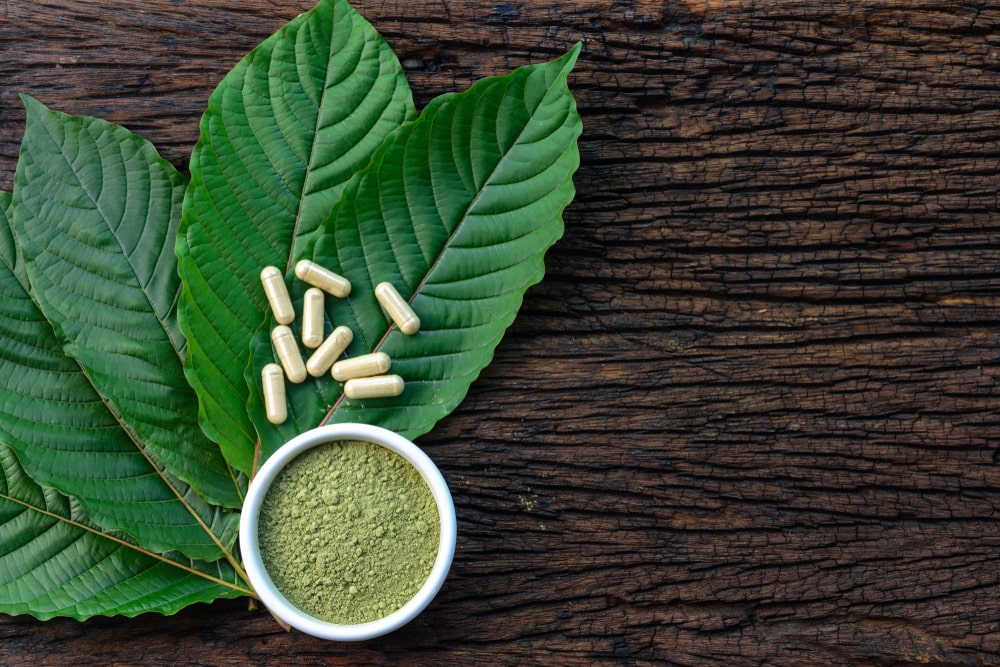 Kratom is an herbal supplement that people take for chronic pain or to manage opioid withdrawal. People use it recreationally too.

The substance comes from the Asian plant Mitragyna Speciosa. This plant is part of the coffee family. The stems and leaves of the plant are dried and ground. Then, they’re brewed into tea, or eaten as a powder or a capsule.

At low doses, kratom has stimulant effects. They include:

At high doses, kratom has opiate effects. They include:

As of 2019, kratom is legal in most of the United States. It’s illegal in 7 states, including the District of Columbia. Because it’s legal in most states, it’s common to find kratom in convenience stores, head shops, or natural health stores.

Just because kratom is legal in most places doesn’t mean it’s safe. Kratom is addictive and can cause withdrawal. Some people start taking the substance to manage opiate addiction, but find themselves unable to stop.

It may be legal, but kratom is still a dangerous substance. It can cause overdose and death. In the United States, 91 people died from kratom over a 6-month period in 2017.

Here’s what you need to know about kratom:

Is Kratom an Opiate?

Many people use kratom to treat withdrawal from opiates. It’s easy to say that kratom is an opiate, but it’s complicated.

Opiates only include substances derived from the opium poppy plant. Kratom comes from a South Asian plant in the coffee family, the Mitragyna speciosa tree. That means it’s not a true opiate.

However, kratom acts on opioid receptors in your brain, even though it’s not a true opiate. This is what gives the herb sedating effects when you take it in large doses.

Because kratom acts on opioid receptors, it causes opioid effects. These effects can include:

Some people take kratom to avoid feeling withdrawal symptoms when they stop using opiates. It’s true that kratom stops the feeling of withdrawal, but using it brings its own problems.

Kratom can be addictive. A study found that people who took kratom for more than 6 months and then stopped using it had opioid withdrawal symptoms.

Many people take kratom so they can avoid taking medications like naloxone for opiate recovery. But taking kratom can lead to needing naloxone anyway.

Kratom isn’t a substitute for opioid treatment. Withdrawal from kratom can be severe enough that you’ll need medication-assisted treatment, which uses drugs to manage withdrawal.

You might have some of these symptoms or all of them. Heavier use can mean withdrawal that’s more severe. You may also have cravings for kratom.

Getting over the peak can be hard without help. Checking into a treatment center for kratom detox can make it easier. There’s no shame in needing medical help to get through kratom withdrawal.

Kratom is legal in most of the United States. As of 2019, there are 6 states where kratom is a controlled substance. This means it’s illegal to:

A few states have legal kratom, but its use is restricted by age. They include:

The drug is legal in all other states, but it’s banned in some areas on a county level. It’s also banned in Washington, D.C. and several other major cities. Check with your local jurisdiction if you’re not sure about your area.

Kratom may be legal in most places, but that doesn’t make it safe. People have died from kratom overdose or from mixing kratom with other substances.

The public perception is that kratom must be safe because it’s legal. But that couldn’t be farther from the truth. There are plenty of ways that kratom can be dangerous to your health.

It could be contaminated with other substances. The Food and Drug Administration doesn’t regulate it, so there aren’t standards or rules about how to produce it. One batch of kratom can be much stronger than another. This can cause an overdose when you thought you were taking a safe amount.

Overdosing on kratom is a possibility. That’s especially true when you mix kratom with other substances. Kratom overdoses with opioids are common.

Here’s more about the risks of kratom:

Kratom production is not regulated by the Food and Drug Administration (FDA).

You don’t know what you’re getting when you use unregulated kratom. It could contain traces of other drugs from K2 to unlabeled plant matter with mold and pesticides.

Kratom sold in head shops, convenience stores, or online could be contaminated with chemicals from processing. Street kratom could be mixed with other substances to increase its potency and lower its cost.

It’s impossible to know how pure kratom is before you use it. Again, that’s because the substance isn’t regulated by the FDA. That makes it easy to take too much kratom by accident.

Kratom sold by 10 different brands or manufacturers might have 10 different purity levels. Manufacturers aren’t required to list purity on the label. You could take a dose that’s much too high without knowing it.

Kratom and Other Drugs

There isn’t much research looking at how kratom interacts with other drugs. But we do know that many kratom overdoses involve other drugs.

All of these drugs are opioids. Because kratom has opioid qualities, it could increase your risk if you take other opioids with it.

Kratom overdose is a medical emergency. Call 911 if you’re having a kratom overdose. Overdose can lead to death.

The signs and symptoms include:

Because kratom overdoses have two types of symptoms, it can take more than one kind of drug to treat the overdose. Naloxone can treat the opioid symptoms. A benzodiazepine such as Ativan can treat stimulant symptoms like seizures and agitation.

Treating kratom can involve treating symptoms and withdrawal with drugs, which is called medication-assisted treatment. It can also include behavioral therapy, which helps you recognize addiction triggers so you can avoid them.

Most treatment involves a combination of multiple treatment types. Here’s what you need to know about kratom treatment:

A medical detox from kratom means you’ll withdraw from the drug under medical care. Professionals will monitor your symptoms and treat them to keep you comfortable.

Medical detox may involve opioid medication-assisted treatment drugs, such as:

It may also involve benzodiazepines to control severe symptoms, such as seizures and agitation. If you have symptoms such as high blood pressure or high heart rate, those can be treated with medications, too.

One-on-one therapy is an important part of kratom treatment and recovery. Therapy often starts at the beginning of treatment and continues for as long as the patient wants.

Types of therapy include:

Some people choose to attend therapy indefinitely. Others eventually manage their disorder without it. Your therapist will help you decide how much therapy is right for you.

You can beat kratom addiction, so don’t wait. Call a substance abuse treatment center today to start your journey to recovery.