Home > What Is Spice? 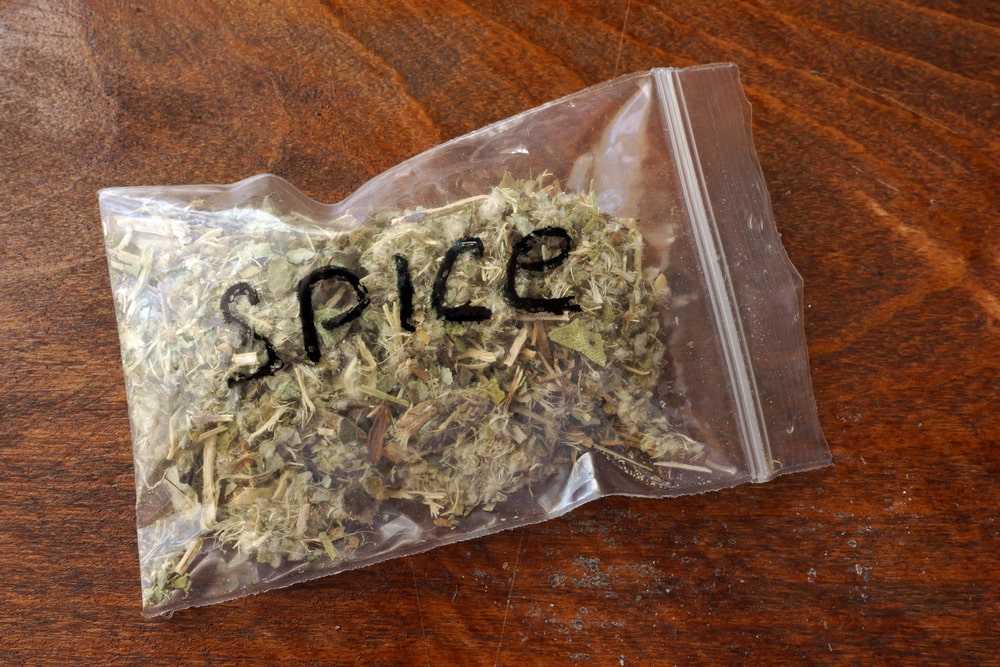 Spice is a synthetic cannabinoid or a drug that mimics marijuana. It attaches to the same brain receptors as marijuana. That means the effects are similar, including euphoria and sedation.

You may have heard spice called by a different name. A few include K2, Black Mamba, and AK-47. Others include Moonrock, Skunk, and Bliss. Or you may hear people call it a fake weed.

Spice is made by spraying cannabinoid chemicals on dried-out plant matter. The result is a dried herbal material that users smoke or vape. It looks like ground marijuana but doesn’t contain cannabis. It’s sold in a small foil packet that’s usually colorful.

It may look like cannabis, but spice can be stronger and less predictable. That means it’s more dangerous. Two batches of spice can have completely different chemicals and strengths. One may be completely safe, while the next is lethal or causes psychotic symptoms.

Here’s what you need to know about spice or synthetic marijuana:

What Are the Effects of Spice?

Spice has many of the same effects as marijuana. They include:

Side Effects of Spice

Not everyone responds to spice the same way. Some people have side effects, which can be serious. They include:

These are psychotic symptoms. That means they’re symptoms of psychosis, a condition that makes it hard for you to stay in touch with reality. It’s not known why some people get psychosis from smoking or vaping spice.

Sometimes psychosis caused by spice causes suicidal thoughts or violent behavior. If you think you might hurt yourself or someone else, call 911 right away. These thoughts are a medical emergency.

Spice can have short-term and long-term effects on your health. The health effects of spice can include:

What is Spice Made From?

There’s no way to say exactly what spice is made from. There’s no standard for making spice, so it can be very different from one batch to another.

How is Spice Made?

Most spice is made by creating chemicals called cannabinoids. When you use spice, the cannabinoids attach to the same brain receptors that real cannabis activates. This causes the same effects as marijuana.

Manufacturers use dried plant material to mimic the look of marijuana. The material is ground finely, then sprayed with cannabinoid chemicals. Then it’s packaged into foil packets and sold on the street.

The manufacturer might use tea leaves or herbs. However, it’s impossible to know what the plant material is by looking at it. It could contain pesticides or come from a questionable source.

People may choose to smoke spice because they think it won’t show up on a drug test. But that’s not always true. Many drug tests check for over a dozen cannabinoid chemicals that are used to make different batches of spice.

Synthetic cannabinoids work on the same receptors as natural marijuana. The problem is that the cannabinoids used in spice are much stronger than natural cannabinoids.

This means spice is stronger than marijuana. It causes a stronger high at a smaller dose. But it also causes worse side effects at smaller doses. They include psychosis, agitation, anxiety, and paranoia. They can also include physical symptoms, such as heart problems and stroke.

Sometimes a spice is mixed with other drugs or chemicals to make it stronger. Bath salts are one drug that’s commonly used. This can increase your risk of overdose or bad health effects.

Lastly, it’s impossible to know whether the cannabinoid chemicals in your spice were made safely. Spice isn’t regulated because it’s illegal. The chemicals used in spice don’t have to be safe or pure.

Toxic ingredients in spice can cause severe side effects or death. In 2018, over 150 people were hospitalized for severe bleeding after taking spice contaminated with rat poison.

How Dangerous is Spice?

Spice is sold as a safe and natural alternative to marijuana, but this couldn’t be further from the truth. Synthetic marijuana isn’t natural and is not safe.

Spice can be addictive. It causes physical dependence. This means that when you stop using spice, your body experiences withdrawal.

Your body gets used to spice being in your system. It adapts to its present meaning when you stop using spice, your body has trouble adapting without it. You may feel like you’re sick or in pain. And you might have cravings for spice.

You may experience symptoms such as:

Withdrawal can start hours after your last use of spice, but it usually takes around 24 hours. It may take around two weeks before you start feeling better.

It’s hard to stop using addictive drugs like spice. The pain and discomfort from withdrawal can make you want to start using again. Getting help from a treatment center can help you manage symptoms while you withdraw from the spice.

Spice can cause a condition called post-acute withdrawal syndrome, or PAWS. Most people who develop PAWS are opiate users, but it can affect spice users, too.

With PAWS, you have withdrawal symptoms that last months instead of days or weeks. They include:

PAWS symptoms aren’t as severe as normal withdrawal symptoms. But they can make it hard for you to stay in recovery.

There’s no treatment for PAWS except to wait for symptoms to end. Therapy can help manage some symptoms, such as low mood.

Can You Overdose on Spice?

There are many different cannabinoids that are sold as a spice. So, there’s no single substance that the Drug Enforcement Administration (DEA) can track for overdose data.

Still, there are many reports of spice overdose causing permanent damage or death. The reports describe:

Can You Die From Spice?

Yes, you can die from using spice. In a single month in 2018, there were over 300 deaths from spice in Washington, D.C. alone.

Spice can cause death by:

Don’t wait to get help for spice abuse. You’re at risk for overdose and death, no matter what your use habits are. Call a certified treatment center to get substance abuse help today.

Spice is a Schedule I drug. That means it’s illegal to possess, sell, use, manufacture, or buy spice.

If you buy, use, or possess spice, that can lead to misdemeanor charges with a sentence that includes a fine and up to a year of jail time.

Get Treatment for Synthetic Marijuana

Spice isn’t a convenient alternative to cannabis. It poses a serious danger to your health whether you use it daily or rarely. If you’re having trouble quitting synthetic marijuana, then a substance abuse treatment center could be the solution you need.

A treatment center helps you recover from spice by giving you a safe environment to recover in. It offers treatments and therapies tailored to your needs, including medication, medical care, and talk therapy.