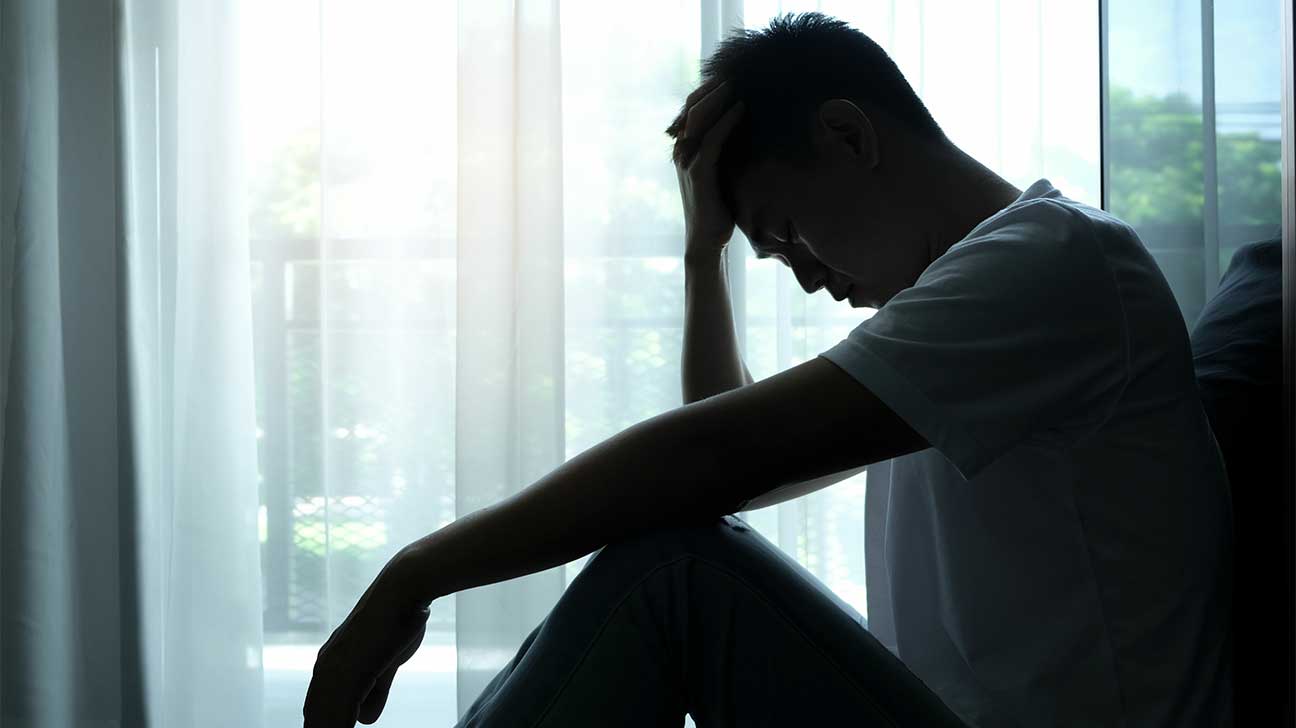 As a result, substance use disorder, which is itself a mental health condition, often coincides with other illnesses.

When a person has an addiction and another mental health impairment, the combination is called a dual diagnosis or co-occurring condition.

If you or a loved one are experiencing thoughts of suicide, call or text 988 to reach the National Suicide Prevention Lifeline.

How Common Is Suicide Among People With Addictions?

Suicide, thoughts of suicide, and suicidal attempts are all very common among people who deal with drug and alcohol abuse.

According to research on suicide and drug abuse, substance use disorders do increase a person’s risk of attempting or dying by suicide.

In fact, some studies on addiction and suicide reveal that more than half of all suicides are connected to drug and alcohol dependence.

Furthermore, the same studies reveal that at least 25% of people who deal with drug and alcohol addiction die by suicide.

Alcohol use disorders, also referred to as “alcoholism,” are especially prevalent among people with suicidal ideation.

Thoughts of suicide and suicidal attempts may overlap with addiction for several reasons.

Co-occurring disorders are very common among people who deal with substance abuse.

In fact, according to research from the National Alliance on Mental Illness (NAMI), more than half of people with an addiction also have another mental health condition. These co-occurring conditions may exacerbate suicidal thoughts.

For instance, clinical depression is a condition that commonly occurs alongside addiction. One of the more extreme symptoms of depression is suicidal ideation.

But other disorders can bring about suicidal thoughts as well. Extreme anxiety, obsessive-compulsive disorder, and post-traumatic stress disorder have all been linked with an increased risk of suicide.

A person with any of these co-occurring conditions might use prescription drugs, illicit substances, or alcohol as a way to self-medicate mental illness and suicidal thoughts.

Drug Abuse And Feelings Of Hopelessness

Studies on addiction and suicide state that feelings of hopelessness are a major predictor of suicidal thoughts and actions.

People who contemplate or plan suicide generally feel a sense of despair, believing that there is no hope for their situation to improve.

Drugs and alcohol can cause or worsen feelings of hopelessness, as they may lead people to believe that there is no way out of addiction.

This is typically reinforced through cycles of drug use, getting sober, and relapsing. With the right treatment approach, recovery is possible. But in the moment, it often feels hopeless.

Drug and alcohol withdrawal symptoms may contribute to the feelings of hopelessness that often predict suicide.

When a person with a substance use disorder stops abusing drugs, their body enters a state called detox. During detox, the substances begin to leave the body.

Many people experience withdrawal symptoms during this time, which are physical and mental struggles that occur in the absence of a substance that the body has grown dependent upon.

When withdrawing from opioids, such as fentanyl and heroin, a person might experience intense pain and physical symptoms that can become very overwhelming, especially if left untreated.

Additionally, detoxing from drugs of abuse such as methamphetamine and cocaine often causes hallucinations, paranoia, anxiety, panic, depression, and other psychological effects that increase the risk of suicide.

Some people continue to use drugs, not because they do not want to recover but because they experience painful symptoms when they attempt to quit and it’s too much to withstand.

For these individuals, medical detox can provide symptom relief and support before they receive other forms of addiction therapy.

The Centers for Disease Control and Prevention (CDC) reports that poisoning is the third most common method of suicide and that among those deaths, 75% were caused by drug or alcohol overdose.

Drug Use And Impulsive Behaviors

Many drugs lower inhibitions, and as a result, they can increase impulsive behaviors.

Often, when under the influence of drugs or alcohol, people make rash decisions that they would not make while sober.

The decision to die by suicide may occur as a result of this drug-induced impulsivity, as somebody who is drunk or high may not have the presence of mind to consider other options.

Being under the influence of powerful substances can intensify feelings and emotions such as sadness, anger, frustration, and loneliness.

A lack of support and community is another common risk factor for suicide and suicidal ideation.

Substance use disorders can contribute to this lack of support as addiction can be very isolating, either by choice or by nature.

A person may choose to withdraw from family and friends to hide their drug use. Or, they may lose loved ones along the way from crossing boundaries with the people they care about, stealing money, lying, or going through major behavioral changes.

This isolation may lead people with addictions to feel as if they have no way to receive help. So, when thoughts of suicide creep in, they may feel they have no one to turn to.

Which Drugs May Increase The Risk Of Suicide?

Any mind-altering substance has the potential to become addictive and increase a person’s risk of suicide as a result.

However, certain types of drug use are especially common among people who deal with suicidal ideation.

Alcohol use disorders have an especially strong link to suicidal thoughts and actions.

Furthermore, according to the Mayo Clinic, alcohol use can make antidepressant medications less effective.

Opioids are a class of drugs that inhibit the way the brain processes pain. As a result, they are often prescribed for severe pain conditions and post-surgical pain.

However, opioids are extremely addictive, and according to the Substance Abuse and Mental Health Services Administration (SAMHSA), opioids are involved in 20% of suicide deaths in the U.S.

More research is needed to determine the exact connection between opioids and suicidality. However, risk factors may include a loss of community support, lowered inhibitions, and impaired cognition.

Depressants are drugs that slow down the central nervous system (CNS). They include medications such as sedatives and tranquilizers.

Alcohol is also a CNS depressant, though it may cause short-term feelings of euphoria.

Depressants have been associated with a heightened risk of suicide, possibly due to the same factors that contribute to opioid-related suicides.

Stimulants are drugs that speed up the CNS, usually by increasing the brain’s available dopamine, a chemical that increases happiness, focus, and motivation.

CNS stimulants include several medications that are prescribed for attention-deficit hyperactivity disorder (ADHD), as ADHD symptoms are caused by a lack of dopamine.

When abused or misused, however, these medications can cause an intense euphoria followed by a “crash” when they wear off.

Other stimulants include certain illicit drugs such as cocaine and methamphetamine, and these drugs also cause a high followed by a crash.

That crash can cause feelings of depression and other serious mental health symptoms, which may contribute to the risk of suicide.

Signs And Symptoms Of Drug Abuse And Suicide

Substance use disorders and suicide both have several warning signs, many of which overlap and are especially prevalent in people who deal with both addiction and suicidal ideation.

Knowing the signs and symptoms of both can help loved ones intervene when necessary.

Signs And Symptoms Of Drug Addiction

Many people with a drug or alcohol addiction will do everything possible to hide their substance use disorder.

However, over time, these signs may become increasingly difficult to hide.

Some signs of addiction include:

Signs And Symptoms Of Suicidal Ideation

Many signs of suicidal ideation overlap with the signs of addiction.

Other signs of suicidality do not necessarily overlap with substance abuse.

Increased drug and alcohol use may also be a sign of suicidal ideation.

Both addiction and suicidality are preventable and treatable. Having access to care, support, and information can make a major impact on mental health outcomes.

Addiction rehab centers provide intensive substance abuse treatment for about 30 to 90 days. You can also find long-term programs lasting six months to a year or longer.

Outpatient treatment centers provide the same therapies as inpatient programs, but participants commute to these programs.

You can find both inpatient and outpatient programs that offer treatments to address depression and suicidal thoughts.

Dual diagnosis care addresses both the addiction and any underlying mental health conditions, including depression, suicidal ideation, and other disorders.

This type of treatment is important, as addiction can worsen mental health conditions and vice versa.

Treatment might involve a range of therapeutic approaches designed to help people with co-occurring disorders, including trauma-informed therapy and cognitive behavioral therapy.

Detox programs provide medical supervision and symptom relief during the time when drugs and alcohol leave the body.

Some drugs, such as opioids, require a gradual detox process in which the person receives smaller and smaller doses of the drug.

Medical detox can make withdrawal less overwhelming, which may decrease the feelings of hopelessness that can lead to thoughts of suicide.

Aftercare, or continuing care, is offered by many rehab programs. It generally includes long-term therapy that can help people continue their recovery after leaving rehab.

Other forms of aftercare include sober living environments and support groups. Having continued support and a strong community greatly decreases the chances of suicide post-treatment.

FAQs About Substance Abuse And Suicide

Substance abuse and suicide are deeply complex topics, and it’s natural to have questions about both.

Here you’ll find some of the most frequently asked questions about addiction and suicide.

How Common Is Suicidality And Addiction?

Addiction and suicidality commonly overlap with one another. More than 50% of suicides are connected to drug and alcohol addiction.

What Causes Addiction And Suicidal Ideation?

Both addiction and suicidal ideation are caused by several factors, including genetics, family history, trauma, and other life circumstances.

What Is The Difference Between Suicidality And Attempted Suicide?

Attempted suicide is taking steps to end one’s life. It falls under the broader umbrella of suicidality.

How Do You Cope With Mental Illness And Addiction?

Several treatment options are available for people with substance use disorders.

For people who also deal with suicidality, the most effective options will include dual diagnosis treatment, which addresses addiction and any co-occurring conditions.

For those with a plan or intent to die by suicide, emergency care is needed as soon as possible. Calling or texting 988 will connect you to the National Suicide Prevention Lifeline.

Does Addiction Cause Suicidal Ideation?

Addiction can lead to suicidal ideation in both direct and indirect ways. For example, some drugs can worsen symptoms of depression, which may include thoughts of suicide.

Likewise, addiction can cause social isolation, and the resulting lack of support can contribute to feelings of hopelessness.

How Can I Pay For Dual Diagnosis Treatment?

The cost of treatment should never be a barrier to recovery. If you have health insurance, your insurance company may cover a portion of your dual diagnosis treatment.

For people with suicidal ideation, the following resources can provide guidance, information, and support.

To find help for yourself or a loved one, explore these resources: