Heroin addiction is a life-threatening disease that is complex, but treatable. Signs of heroin abuse may include behavioral or emotional changes, weight loss, track marks, or impaired coordination. 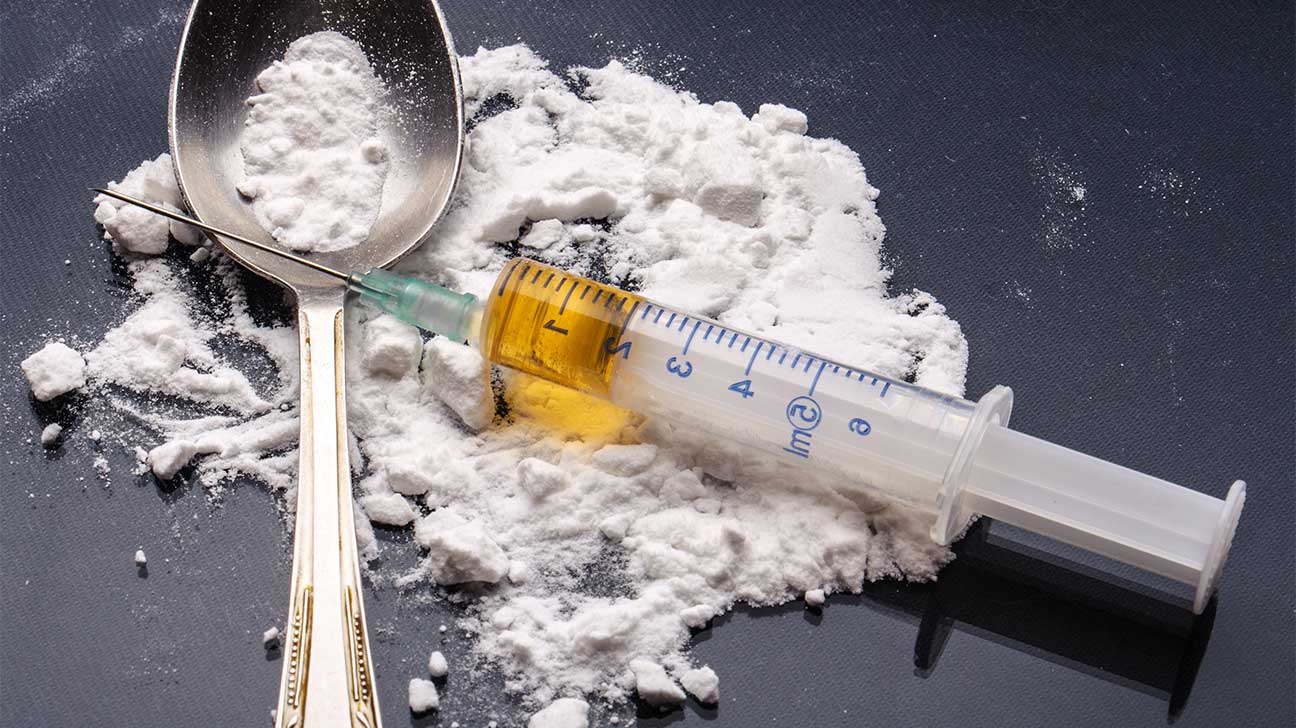 The drug is often sold in the form of a white or brown powder, or tar-like substance.

Abusing this drug can lead to mental health issues, short-term and long-term physical complications, and substance use disorder.

Below, learn about the prevalence of heroin use in the U.S., the effects of the drug, how heroin is used, and more.

Heroin Statistics: Use, Overdose, And Recovery

Heroin use in the United States has risen sharply in the past two decades, due in part to the widespread abuse of prescription opioids such as oxycodone.

According to the National Institute on Drug Abuse (NIDA), about 80% of people who use heroin in the U.S. first misused prescription opioids.

Heroin is cheaper than prescription opioids, however, and more easily accessible in the wake of greater restrictions on prescribing.

Key facts about heroin abuse in the U.S.:

Heroin overdose statistics in the U.S.:

A highly addictive substance, heroin works in the brain by binding to opioid receptors — particularly, those associated with feelings of pleasure and pain.

It may take on several forms depending on the type and purity of heroin, such as black tar heroin or powder heroin.

Learn more about the different types of heroin.

You can identify heroin by recognizing the color, texture and appearance, paraphernalia, and more.

Here’s what to look for when identifying heroin:

A heroin high may last up to five hours, setting in after about 20 seconds and peaking around the second hour.

Heroin may be detectable in your system for anywhere between 2 and 90 days.

Heroin is detectable in your urine for about 2 days. The blood detection time for heroin is even shorter at just a few hours.

Heroin is an addictive, mind-altering drug that can have both physical and psychological effects.

The side effects of heroin should be taken seriously. At times, immediate medical attention may be necessary.

Short-term effects of heroin include:

Long-term side effects of heroin include:

A person might feel the following mental side effects from heroin:

The following physical side effects of heroin may occur:

Learn more about the effects of heroin abuse.

Signs Of Heroin Use

You can recognize several signs someone is on heroin, including physical and behavioral signs.

Below are common physical signs of heroin use:

Behavioral signs of heroin use may include:

Learn more about recognizing the signs of heroin abuse.

Addiction can cause strong drug cravings and reinforce continued use, resulting in a dangerous cycle.

It can also cause the body to experience uncomfortable symptoms beginning within hours of your last dose.

This is known as heroin withdrawal, the symptoms of which can be mild to severe.

Often, the cycle continues because a person can’t withstand the withdrawal symptoms, using heroin again to alleviate the discomfort.

The following are some of the most common symptoms of heroin withdrawal:

Heroin withdrawal is generally not life-threatening, but it can be very uncomfortable or painful.

It can also cause dehydration due to excessive vomiting and diarrhea. Without proper medical support, this can be dangerous.

Read more about the common signs of heroin withdrawal.

Risks Of Heroin Use

Over time, the repeated use of heroin can cause a vicious cycle in which a person may use heroin more frequently and in greater amounts.

This can cause a whole host of effects on physical and mental health, as well as impact other areas of a person’s life.

It’s important to be aware of the risk and signs of overdose, especially if you or someone you love have been using the substance.

It may take about 200 mg to overdose on heroin. However, some people who abuse heroin may tolerate as much as 10 times more than this amount.

Mental signs of heroin overdose include:

Physical signs of heroin overdose include:

In case of an overdose, a person must administer naloxone immediately.

Naloxone is a life-saving medication that can reverse the harmful effects of opioids by blocking opioids from binding to the receptors in the brain.

Learn more about the signs and symptoms of a heroin overdose.

A person who abuses heroin may use it in one of three ways: injecting heroin (skin popping), smoking heroin, or snorting heroin.

Many people start by snorting or smoking heroin and eventually level up to injecting it, as injecting heroin has the strongest effects.

However, injection comes with the greatest health risks, including HIV and other infections from using dirty needles.

Find more information on the methods of heroin use.

A few of the most common street names for heroin include:

Heroin And Other Substances

Heroin may be compared to other substances, such as prescription or illicit drugs that share similar properties or makeup.

Here are the major differences between heroin and other drugs:

Living with addiction can be a painful experience for both the person with heroin addiction and their loved ones.

Overcoming heroin abuse may require treatment at multiple levels of care. The safest way to stop using heroin and avoid relapse is to enter a medically supervised detox program.

After a heroin detox program, it’s best to enter one of the following addiction recovery programs.

Inpatient rehab programs offer a supportive environment for people to heal from the effects of addiction.

Here, you or your loved one will learn supportive coping strategies for managing the challenges that may lie ahead on the road to recovery.

You may choose a short-term 30-day program or a longer residential treatment program. Both of these options will provide 24-hour care and supervision.

Certain medications, along with behavioral counseling, can be very helpful in early recovery from heroin dependence or addiction.

If you or your loved one are not ready for an inpatient program, you can choose between several levels of outpatient care for heroin addiction recovery.

Outpatient treatment is also a good step-down option to continue your recovery after an inpatient or residential treatment program.

Outpatient options may include:

You can also find many specialized programs for heroin abuse treatment. This is because addiction is not a one-size-fits-all illness, and each person may require different services.

If you suspect that you or someone you love has a heroin addiction, you may have questions about heroin abuse.

Explore some of the commonly asked questions about heroin’s effects, characteristics of heroin, and more.

Does Heroin Cause Neuropathy?

Heroin addiction has been linked to a number of neurological complications, including acute neuropathy (damage to your nerves).

Is Heroin A Nervous System Depressant?

Is Heroin Controlled Or Illegal?

Heroin is an illegal drug. It is listed by the U.S. Drug Enforcement Administration (DEA) as a Schedule I drug, meaning it has no accepted medical use and has a high potential for abuse.

Where Is The Main Source Of Heroin?

Heroin is produced in South America, Mexico, Southeast Asia, and Southwest Asia. Much of the world’s heroin supply comes from Afghanistan.

Heroin is not produced in the United States.

Heroin may have a bitter taste or no taste at all. Heroin often takes on the smell and taste of its additives or impurities.

How Addictive Is Heroin?

As a Schedule I substance, the DEA warns against using this drug because there is a high likelihood of forming an addiction or physical dependence on the drug after just a few uses.

Why Do People Use Heroin?

People use heroin to feel a sense of intense euphoria and pleasure.

However, the negative physical, mental, and behavioral effects of the drug and the likelihood of addiction far outweigh the pleasurable effects.

What Kind Of Drug Is Heroin?

Heroin is an opioid drug made from morphine, taken from poppy plants.

Conquering addiction is not easy, but it is possible.

If you know someone in or near Massachusetts who is ready to overcome heroin addiction, Spring Hill Recovery Center may be right for you.

Our treatment programs offer a wide array of traditional treatments and holistic therapies. Call us today to learn more about our programs for heroin addiction recovery.