Meth addiction is a mental health disorder that causes many physical and emotional side effects. This stimulant drug is highly dangerous and extremely addictive, but treatment is available. 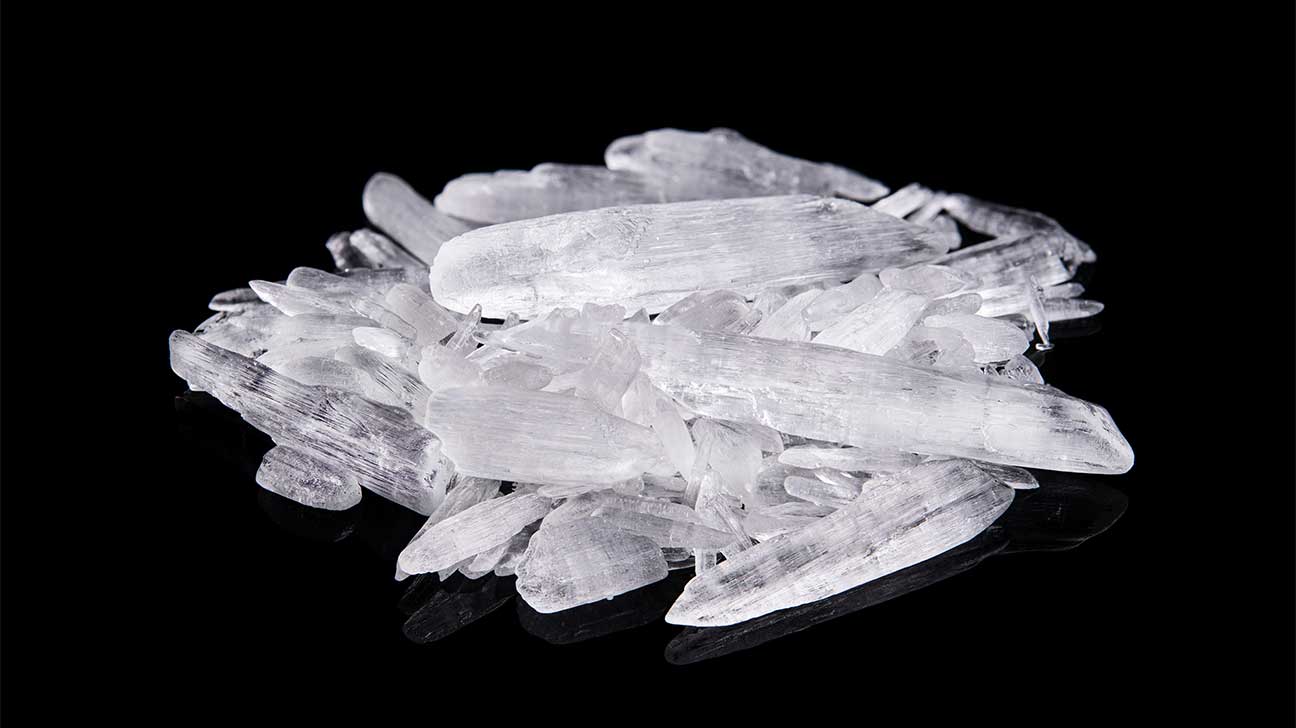 Methamphetamine (meth) is a stimulant drug that impacts people all across the United States. This drug goes by several street names.

Some of the most common slang terms for meth include:

Meth is highly addictive, and although it causes short-term euphoria, it also causes many unpleasant and even dangerous side effects.

According to United States meth laws, this drug is illegal in all 50 states. However, one legal form of meth is available as a prescription to treat ADHD.

Below, we’ll answer questions regarding the meth cooking process, the side effects of meth, addiction treatment for meth abuse, and more.

Meth belongs to a class of drugs called stimulants, which are drugs that speed up the central nervous system (CNS).

The history of meth began in the early 1890s when it was manufactured as a narcolepsy medication and alertness aid.

As a stimulant, this drug shares similarities with Adderall, though there are also several differences between Adderall and meth.

Meth is made through a complex cooking process that involves laboratory equipment, strong chemicals, and ingredients that come from common medications. The high cost of meth is due in part to this complicated manufacturing process.

How Meth Works In The Brain And Body

Meth produces several effects in the brain and body. Meth can stay in the system for varying lengths of time, depending on several factors.

As long as meth remains in the system, it can create devastating short-term and long-term effects on a person’s health.

Learn how long meth stays in the body.

Meth’s Effects On The Brain

Because meth is a stimulant, it works by impacting the brain’s supply of dopamine. Dopamine is one of the brain’s reward chemicals.

The brain releases dopamine during certain healthy activities, such as exercising or eating.

This dopamine release makes the person feel happy and energized. As a result of this reward, the behavior is reinforced, and the person is more likely to repeat it.

Some stimulants work by prompting the brain to release dopamine. Others work by slowing the reuptake of dopamine, which means that they stop the brain from “recycling” its dopamine supply.

Meth does both, stimulating the brain’s dopamine supply while holding that dopamine in place. As a result, a meth high feels especially powerful compared to the high that results from certain other drugs.

In addition to this more powerful high, meth impacts the brain in several negative ways.

What does meth do to the brain? It can cause:

Meth’s Effects On The Body

Meth also has a profound impact on the body. The drug can impact everything from the skin to sexual impulses, and the longer the drug use, the worse these effects become.

Below are a few of the most serious and common side effects of meth use:

According to data from the National Institute On Mental Health (NIDA), about 1.5 million people had a meth use disorder in 2020.

In the same year, over 23,800 people died from a non-cocaine stimulant drug overdose. Meth was the primary drug of abuse in these instances.

Meth has a more prominent impact on some communities than others. For example, crystal meth’s impact on the gay community is greater than its impact on straight communities.

Meth use among gay and bisexual men is reported in higher numbers than meth use among other communities, due in part to the stressors and discrimination that these men face.

According to their findings, people who abuse meth tend to have a few things in common.

Some common traits among people who use meth include:

Are There Different Types Of Meth?

Much like cocaine, meth generally appears in white powder form. However, it may be slightly shinier than cocaine due to its different ingredients.

Meth is often sold in eight-ounce batches, which are commonly called 8-balls of meth. This “bump” of meth may appear in its typical white form or another.

The following are some of the most common types of meth:

Unlike meth, which looks like a powder or liquid substance, crystal meth often looks like white “rocks” or “crystals.” It may also have an appearance similar to glass shards.

Crystal meth produces an intense, fast-acting high, but this high dissipates within a few minutes.

When identifying meth use, loved ones may look for physical signs, such as “meth face,” characterized by sores, skin imperfections, and other effects on the face from meth use.

Likewise, certain tools and ingredients may signify the presence of a meth lab, which is a home, structure, or building where meth is produced.

Meth itself may also be identified by loved ones who suspect that a friend or family member is using this drug.

The following are common ways to identify meth by appearance, smell, and taste:

Knowing how to identify meth paraphernalia can also help loved ones spot meth use.

Some items clearly point to drug use, but others may simply be household items, making paraphernalia more difficult to identify.

Some forms of meth paraphernalia include:

A single item, such as a straw or spoon, may not necessarily indicate substance abuse.

However, if you notice two or more items together, or your loved one is concealing these items and carrying them around regularly, this can point to meth addiction.

How Is Meth Used?

Meth can be abused in several ways, and each of these methods creates its own risks.

For instance, some methods of meth abuse, such as smoking, carry a higher risk of nearby people experiencing a meth contact high.

Apart from rare instances of medically-prescribed meth use, all forms of meth use are illicit and dangerous.

Some of the most common ways to use meth include:

Signs Of Meth Use

Meth use may be identified when a person displays the physical and mental signs listed above, including the possession of paraphernalia.

Immediately after using meth, a person may display erratic behavior for several minutes to days at a time. They may also display abnormally high levels of energy.

Afterward, this person may experience a “crash” as the effects of meth dissipate.

Learn more about the signs of meth addiction.

What Happens If You Overdose On Meth?

Meth is a highly powerful drug that can cause an overdose quickly.

Signs of meth overdose include:

If someone you know is having a seizure, struggling to breathe, or becoming violent as the result of an overdose, call 911 immediately and get help.

Hold the back of the person’s head to prevent them from getting injured during a seizure and tilt them on their side to prevent choking on vomit.

Meth is often combined with other drugs, which can heighten the dangers of meth abuse and increase the risk of overdose.

Some common combinations include:

A person might use meth with another substance to intensify the high or balance out the effects of the drugs.

For example, while meth stimulates the body, alcohol has a depressant effect. So, a person may combine these substances to balance the effects and create a more “pleasant” high experience.

However, mixing drugs (polysubstance abuse) is never safe, and this push and pull effect on the brain and body can have serious negative consequences and increase the risk of overdose.

Meth withdrawal involves uncomfortable physical and mental symptoms that occur when a person attempts to stop using the drug.

These symptoms occur due to adjustments in the brain and body.

Symptoms of meth withdrawal include:

As the brain gets used to the amount of dopamine that meth use provides, it becomes less sensitive to dopamine from other sources.

The body, meanwhile, begins to expect the heightened levels of energy that result from meth use, so it makes adjustments of its own.

When the brain and body become accustomed to meth use, they will experience difficulties after the drug is taken away.

The meth comedown timeline differs from one person to the next, depending on several factors. However, for most people, severe symptoms dissipate within one to two weeks.

People who have used meth for many years may have longer-lasting withdrawal symptoms.

When people do begin the comedown process, the resulting withdrawal symptoms may drive them back to the drug.

For many people, addiction treatment begins with meth detox programs. These programs provide medical care and symptom relief as the drug leaves the body.

Because many of the withdrawal symptoms are psychological, clients will receive medical monitoring, behavioral health care, and medications to ease symptoms of depression, anxiety, and paranoia.

Methamphetamine addiction treatment may also include the following:

After addiction treatment, support groups such as Crystal Meth Anonymous can provide a sense of community and prevent the chances of relapse.

Meth addiction is a difficult and complicated disorder, but there are several resources for people who need help overcoming meth abuse.

Is There Meth Addiction Treatment In New England?

Is Meth A Stimulant?

Yes, meth is a stimulant drug. As a stimulant, it increases energy by speeding up processes in the central nervous system.

Meth is made from common medications, especially decongestants. It may also be cut with additives to increase the volume of the product.

Is Meth An Opioid?

No, meth is not an opioid. Stimulants and opioids are two separate drug classes. However, opioids such as fentanyl are occasionally added to meth.

“Speed” is a common street name for meth. However, the same term is often used to refer to other forms of amphetamine.

When Was Meth Invented?

Meth was invented in 1893 by a Japanese chemist. In its early days, it was used as a treatment for narcolepsy and asthma, as well as a weight loss supplement. It gained popularity in the United States shortly after World War II.

What Is A Homemade Meth Pipe?

A homemade meth pipe is a pipe made out of household objects such as light bulbs, drinking glasses, straws, and similar items. Scorch marks and chemical smells may indicate that an object has been used as a meth pipe.

What Schedule Is Meth?

Meth is a Schedule II drug, which means that it has a high level of potential for abuse. Unlike Schedule I drugs, which have no medical uses, Schedule II drugs may have some medical purposes. Nevertheless, these drugs have serious risks.

Was Meth Ever Legal?

Meth was legal throughout much of its history. Before researchers understood the dangers of meth, this drug has been sold as an over-the-counter medication and as a wakefulness aid for pilots.

Does Meth Cause Hallucinations?

Yes, meth can cause hallucinations and other signs of psychosis.

Meth often produces a strong chemical smell when smoked. The smell has been compared to burning plastic, nail salons, and other distinct odors.

Is There A Drug Test For Meth?

Meth can be detected with a drug test. Urine tests are the most common form of drug testing for meth, but meth can also be detected in the blood and hair.

What Is The Difference Between Crank And Meth?

“Crank” and “meth” refer to the same drug. Crank is a street name for methamphetamine.

How Common Are Deaths From Meth?

More than 23,800 died due to non-cocaine stimulant use in 2020. Most of those deaths involved meth.

Meth addiction causes many physical and mental health complications, but it is a treatable condition.

When you come to our treatment center for help, we’re with you every step of the recovery journey from inpatient to outpatient rehab and aftercare services.

If you or a loved one may need addiction help, contact Spring Hill today to learn more about your treatment options.