Home > Addiction In The LGBTQ+ Community

Substance Abuse Treatment And Recovery In The LGBTQ+ Community 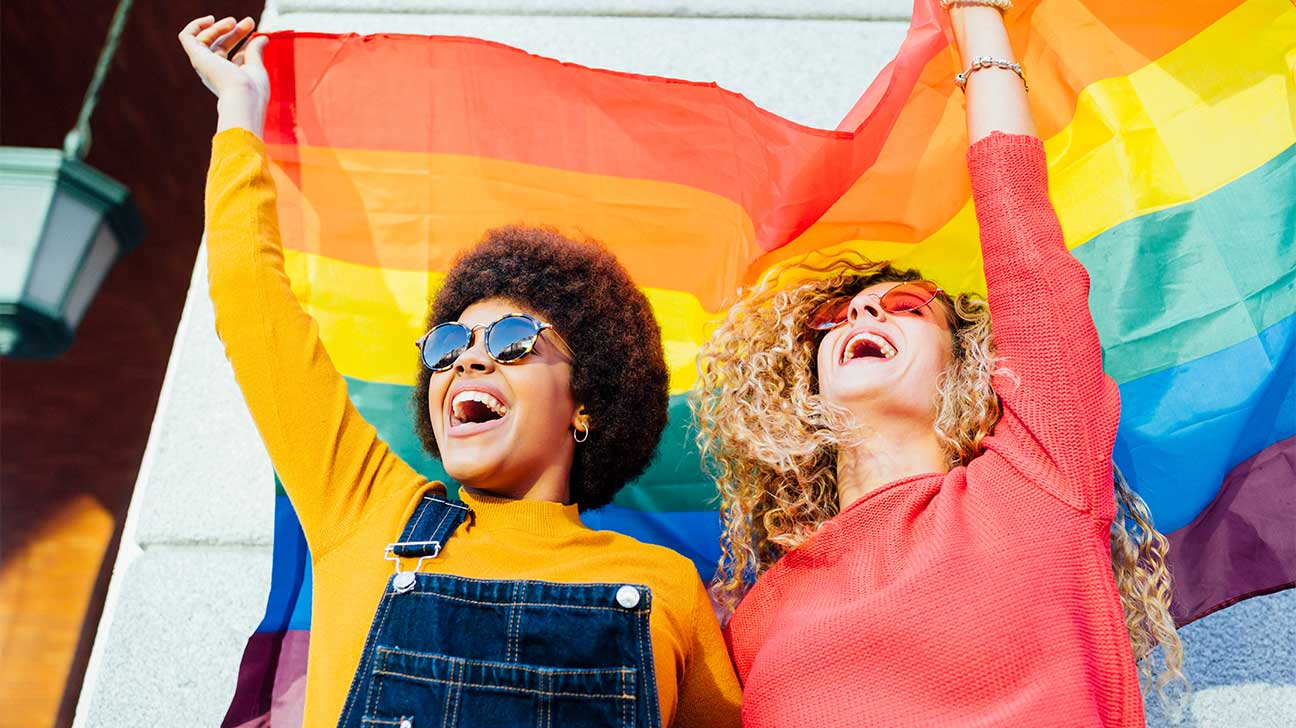 People who identify as lesbian, gay, bisexual, transexual, questioning, intersex, asexual (LGBTQIA+), or other nonconforming identities experience more trauma because of their orientation.

Stressors such as discrimination put people in this population at higher risk of substance abuse and mental health disorders, and healthcare barriers put them at a further disadvantage.

Is The Rate Of Substance Abuse Higher In The LGBTQ+ Community?

Data from national surveys on substance use disorders show that there are significant disparities in substance abuse rates among sexual and gender minorities in the U.S.

According to the National Survey on Drug Use and Health, 18.7 million adults 18 and older had a substance use disorder, with higher rates and compounded risks among LGBTQ+ individuals.

Over a third (37.6%) of sexual minority adults ages 18 and older reported marijuana use, compared to 16.2% of the entire adult population.

Due to health disparities and barriers to treatment, LGBTQ+ individuals have been disproportionately affected by untreated substance use and mental health disorders.

Why LGBTQ+ People May Abuse Substances

Research studies have linked the prevalence of substance abuse in LGBTQ+ populations to the challenges and stressors caused by discrimination against non-heterosexual orientation.

People who identify as sexual and gender minorities are often the targets of discriminatory behaviors and actions that affect them socially, mentally, and emotionally.

Social stigmatization and discrimination against LGBTQ+ people and communities often manifest in various forms of abuse, intimidation, harassment, and violence.

People who are abused or threatened because of their sexual orientation often have difficulty coping with emotional stress and trauma, and the adverse effects on self-esteem.

Discrimination can be difficult to avoid at work, in social settings, and for some even at home. The anxiety and fear that discrimination triggers can have crippling effects on emotional health.

Overt and covert aggressions against people for their sexual orientation and gender identities have profound psychological impacts that are extremely harmful to mental health.

People who are targeted and victimized by homophobic stigmatization and discrimination often become withdrawn and affected by what is known as internalized homophobia.

As mutual risk factors, one can be the cause or the result of the other. And as one disorder manifests in negative symptoms, it can worsen the symptoms of the other disorder.

Emotional stress and trauma that sexual minorities experience as a result of discrimination and homophobic biases are major risk factors for substance abuse, causing it to develop or worsen.

Those who are impacted by chronic stress throughout adolescence and adulthood due to LGBTQ+ oppression and intolerance are at increased risk of depression and anxiety.

Mental and behavioral health disorders in this community often remain undiagnosed and untreated, leading to maladaptive strategies such as self-medication to manage symptoms.

Minority stress theory identifies the unique stressors that affect people who do not conform to heterosexuality and conventional gender identity, and increase the risks of substance abuse.

While alcohol abuse and addiction are common health concerns, some substances are more commonly misused with a higher prevalence among people who identify as LGBTQ+.

People often start to increase and diversify substances to manage their adverse symptoms, which compounds the damage to mental health and quality of life.

The following are some of the most common drugs of choice in the LGBTQ+ community.

According to the Centers for Disease Control and Prevention (CDC), stimulants are some of the most commonly abused drugs among gay and bisexual men.

Some of these stimulant drugs include:

Drugs that treat erectile dysfunction are also prevalent and used to increase sexual function and arousal while supplementing the euphoric effects of amphetamines and other stimulants.

The health risks of methamphetamine and cocaine addiction include:

Research on the correlation between opioid use and mental health indicates that symptoms of untreated depression, such as suicidal thoughts, are contributing factors to opioid addiction.

Sexual minorities are often victimized from a young age and impacted by stress that interferes with their psychological development, emotional regulation, and behavioral adaptation.

Addiction to prescription drugs is often predicated by stressors that impede social development and stunt mental health. Opioids can temporarily alleviate anxiety and feelings of insecurity.

However, the effects of opioid dependence ultimately exacerbate mental health disorders and can lead to dangerous consequences, including fatal overdoses.

“Club drugs” such as ecstasy, LSD, and ketamine are prevalent in clubs, rave parties, and other social outlets.

These are often places where people find refuge in connecting with each other and escaping discrimination.

People in the LGBTQ+ community often get introduced to mind-altering drugs in nightlife culture. What begins as social and recreational drug use can quickly lead to chronic abuse.

Ecstasy and methamphetamine are both prevalent in sexualized drug use, which is when recreational drugs are used for the purpose of facilitating sexual activity.

These substances increase exposure to sexually transmitted diseases and vulnerability to substance use disorders.

The consequences of substance abuse involving intravenous injection drug use greatly increase the risks of contracting and spreading HIV and other sexually transmitted diseases.

People who use methamphetamine and heroin are at a particularly high risk of being exposed to HIV and STDs.

This high risk comes from intravenous injections with unsterile meth or heroin needles, or unprotected sexual activity while under the influence of drugs.

Vulnerability to HIV also increases the risk factors and severity of depression and anxiety disorders and becomes a reason for people to avoid treatment altogether.

People who identify as LGBTQ+ and use heroin or meth intravenously may have fear or shame triggered by stigmas surrounding HIV and homosexuality.

Barriers To Treatment For LGBTQ+ People

Sexual and gender discrimination continues to be a major barrier that prevents many people from getting access to much-needed treatment for mental health and substance use disorders.

Here are some of the most prevalent barriers to treatment for this community.

Discriminatory bias among healthcare providers is unfortunately not uncommon, and many sexual minorities find themselves victims of discrimination in hospitals and treatment programs.

In some cases, a person may actively seek treatment at programs that emphasize LGBTQ+ advocacy and sensitivity, but are often dismayed by false advertising and lack of compassion.

Behavioral health treatment centers can mislead LGBTQ+ clients by claiming to offer specialized counseling with trauma specialists when in reality, those services are not provided.

Sexual minorities are significantly underrepresented in treatment programs and facilities. This can deter them from seeking treatment, or prevent their needs from being met in rehab centers.

For example, men and women who are HIV positive or have other sexually transmitted diseases need specific medical care and treatment, which many facilities and programs do not provide.

It is important that drug detox centers and treatment programs be equipped and professionally staffed to provide unbiased and quality care for every person who comes seeking treatment.

The lack of dual diagnosis treatment options is a significant issue for people with multiple health disorders related to substance abuse and sexual minority stress or trauma.

Victims of abuse related to sexual discrimination and oppression cannot effectively recover from addiction without being properly treated for other psychiatric diagnoses, and vice versa.

Dual diagnoses must be treated simultaneously for the best possible outcomes and require empathetic and tailored approaches to treatment.

By the end of treatment, clinicians can work with dual diagnosis clients to create a plan with relapse prevention strategies that address both the substance use and mental disorder.

While many addiction treatment facilities do provide treatment for co-occurring disorders, not all do.

Additionally, counseling is not the same as treating a dual diagnosis, so while therapy may be available, specialized care is still needed.

For sexual and gender minorities, inpatient treatment options are very limited, and these limitations can deter them from seeking addiction treatment out of frustration or intimidation.

Inpatient and residential rehab facilities are often structured according to gender, which poses discriminatory challenges to transgender and non-binary clients.

Transitional and sober living for LGBTQ+ people is another challenge due to the lack of accommodation and flexibility among rigidly gender-specific recovery residences.

The Importance Of LGBTQ+-Specific Addiction Treatment

Diversifying homogeneous approaches in residential rehab and outpatient care is a step toward making treatment more inclusive for people of all sexual orientations and identities.

There are ways to support someone with an addiction who has been affected by sexual discrimination. This requires unique therapeutic skills and a nuanced approach.

By training clinicians and treatment professionals on how to accommodate the unique needs and sensitivities of LGBTQ+ clients, the barriers to treatment can be broken down.

All phases and components of addiction and mental health treatment, from initial interventions to aftercare programs and sober living homes, are crucial to success in recovery.

Fostering inclusivity and accommodating the complex needs of sexually marginalized clients are necessary to encourage all people to seek help and feel safe and supported in treatment.

For members of LGBTQ+ communities, the following are helpful and informative resources on how and where to seek support and guidance on substance abuse and mental health.

Explore these resources to get started: