Home > The Dangers Of Club Drugs

The Dangers of Club Drugs 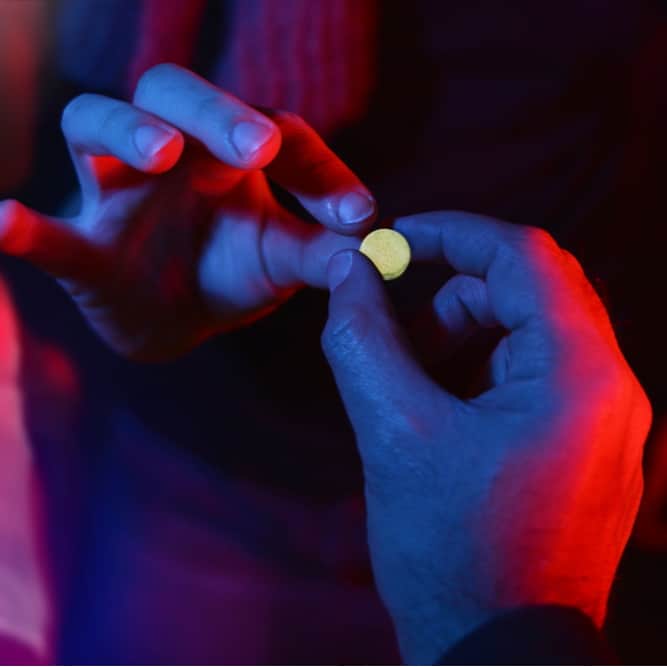 If you go to parties or have teenage or young adult children who do, there is a high chance of encountering club drugs. This set of drugs is used for recreation or sometimes to facilitate sexual abuse. They are dangerous and come with many side effects and risks.

What are Club Drugs?

Club drugs are a class of psychoactive drugs that became popular in the 1980’s when many club goers began using them. They are a dangerous class of drugs that are illegal and sometimes manufactured in home-made labs with no regulation. Also known as designer drugs, they are often used in combination with other drugs or alcohol, greatly increasing the chance for side effects and addiction.

Raves, which are electronic dance parties, have made club drug use more popular since the eighties. In fact, in one study over 61% of those who attended a rave have used a club drug called ecstasy while 44% had used acid (LSD). But this type of drug use is not limited to raves. Drug use among young people is rampant at music festivals, private parties and standard dance clubs, as well.

These types of drugs are usually man-made, or synthetic. Some may be sold as a prescription and diverted to the club scene or specifically made by drug manufacturers for sale at clubs and parties. They are often cheap and easy to purchase, and many people who take them don’t realize they are highly addictive.

Are All Club Drugs Addictive?

Because they are not prescribed and are often used in combination with other drugs, abuse becomes prominent. Any time a drug is abused, the potential for addiction is greatly increased. Club drugs may include methamphetamines, benzodiazepines or hallucinogens, which are all highly addictive.

Those who abuse drugs often have an underlying mental issue, such as depression or substance use disorder (SUD). At the same time, there will be those who use club drugs because everyone else does. Anyone with these problems will tend to misuse them repeatedly, and some will continue drug use outside of the party, creating a higher risk for addiction. Therefore, one of the dangers of club drugs is that they are addictive.

Ecstasy, or MDMA, is the most famous club drug. It contains methamphetamine, which is a stimulant, but is also chemically similar to a hallucinogen. Sometimes called Molly, it produces feelings of euphoria, increased pleasure and distorted sensory perception. Those who take it claim to feel warmth and empathy and use it to lower inhibitions. It can dehydrate a person and raise body temperature, creating a dangerous scenario when used in an overly heated dance club setting. Other side effects include high blood pressure, anxiety, and seizures.

Ketamine is a drug mainly used as an anesthetic in veterinary hospitals. It is a dissociative anesthetic, meaning it blocks sensory perception. When taken, it distorts a person’s environment, like sights and sounds, and causes diminished reflexes and relaxation. If enough is taken a person may experience a feeling of being detached from the body. The worse side effects are uncontrollable eye movements and breathing problems. When used in a clinical setting, it is always under a doctor’s supervision due to the high risk of respiratory distress and death.

Rohypnol is a benzodiazepine drug that causes sedation and reduces anxiety. Side effects of this drug are severe and include: drowsiness, confusion, paralysis and amnesia. It is illegal in the United States and is often used by rapists to sedate their victims.

GHB stands for gamma hydroxybutyrate and is a designer drug. It is a central nervous system depressant that is usually manufactured in home or personal labs for use in the club scene. It may be called liquid ecstasy and causes euphoria and hallucinations. Side effects of GHB include dizziness, drowsiness, and vision changes. More severe side effects are loss of consciousness, cessation of breathing and coma.

LSD is more commonly called acid and was popularized in the 1960s. But today it is sometimes used as a club drug due to the hallucinogenic side effects. It can cause visual distortion, audio hallucinations, and altered thoughts and awareness. Side effects include increased body temperature, increased blood pressure, hallucinations and tremors.

Club drug abuse doesn’t always happen willingly. Date rape drugs are often club drugs that are used to help abusers sexually assault a victim. Even though associated with use by predators while on a date, they are often slipped into drinks at raves, nightclubs or parties. They have no flavor, odor or color so are not detectable, and once the effects begin the victim is too helpless to do anything about it.

Any drug may be used to help a predator commit sexual assault, even alcohol. Many substances can be used to render a victim helpless or weak, and make it easier for the attacker to overpower and abuse them. But certain drugs are more popular for this purpose as they are more prone to cause amnesia so the victim cannot recall what happened.

GHB is a choice used for assault because it comes in a liquid form, has no taste or odor, and can be made at home. Users can find recipes online and the ingredients are easy to get. It is a depressant that easily causes drowsiness and forgetfulness.

Rohypnol is another drug used for this purpose. It is sold in pill form and usually dissolved in the victim’s drink without their knowledge. Sometimes an abuser will give a willing drug user a higher dose than they were expecting, so they can take advantage of the muscle relaxing effect. This will allow them to more easily overpower their victim.

Ketamine is used as a date rape drug because it is a known anesthetic. It can be used to cause a loss of consciousness or paralysis along with amnesia.

Ecstasy is sometimes recognized by law enforcement as a date rape drug. This is because when enough is used, the user becomes overly uninhibited and incapable of making good decisions. This can render them helpless because they are in an altered state and cannot make appropriate decisions. This is the same argument sometimes used to prosecute alcohol related rape.

Know the risks of club drugs to protect yourself and others. The effects of these drugs can take place within minutes after ingestion. Since the drug is usually slipped into a person’s drink without them knowing it, it is consumed as a liquid and can enter the bloodstream quicker.

Symptoms To Watch Out For

If you or someone you know is experiencing these side effects, get help right away. You can avoid being drugged by not accepting drinks from others. Never drink anything that looks or smells suspicious, and watch your drink at all times. The best protection is to go out with friends and watch out for each other.

Because each one is different, there is no one way to treat a club drug addiction. Some drugs contain speed and others are depressants, and each must be dealt with on an individual basis. Making matters more complicated is that many who abuse designer club drugs have co-occurring mental health issues.

Treatment for addiction to club drugs will begin with helping your body detox the drug. Withdrawal symptoms are side effects of stopping long term drug use and should be done under a doctor’s care at a professional treatment center. Professional detox can help lessen side effects with proper monitoring and help avoid complications from withdrawal.

During an addiction evaluation, a professional can help determine if there are any co-occurring disorders and recommend appropriate treatment, including rehab. Rehab is treatment for addiction using different methods of therapy to overcome the mental aspect of addiction.

There are many options for rehab such as individual and group therapies, behavioral modification techniques or alternative therapies. The initial evaluation can help determine which path to recovery is best suited for a patient.

If you or someone you know is addicted or abusing designer club drugs, get help right away. Addiction specialists have experience and can help find a healthy and lasting path to recovery.