The Link Between Eating Disorders & Addiction

Eating disorders and drug addiction are mental health disorders that can make people act compulsively. In a quest for a perfect figure, weight loss, or to offset drug use, some find themselves with both a substance use disorder and an eating disorder. Dual diagnosis treatment can offer substance abuse and eating disorder therapy. 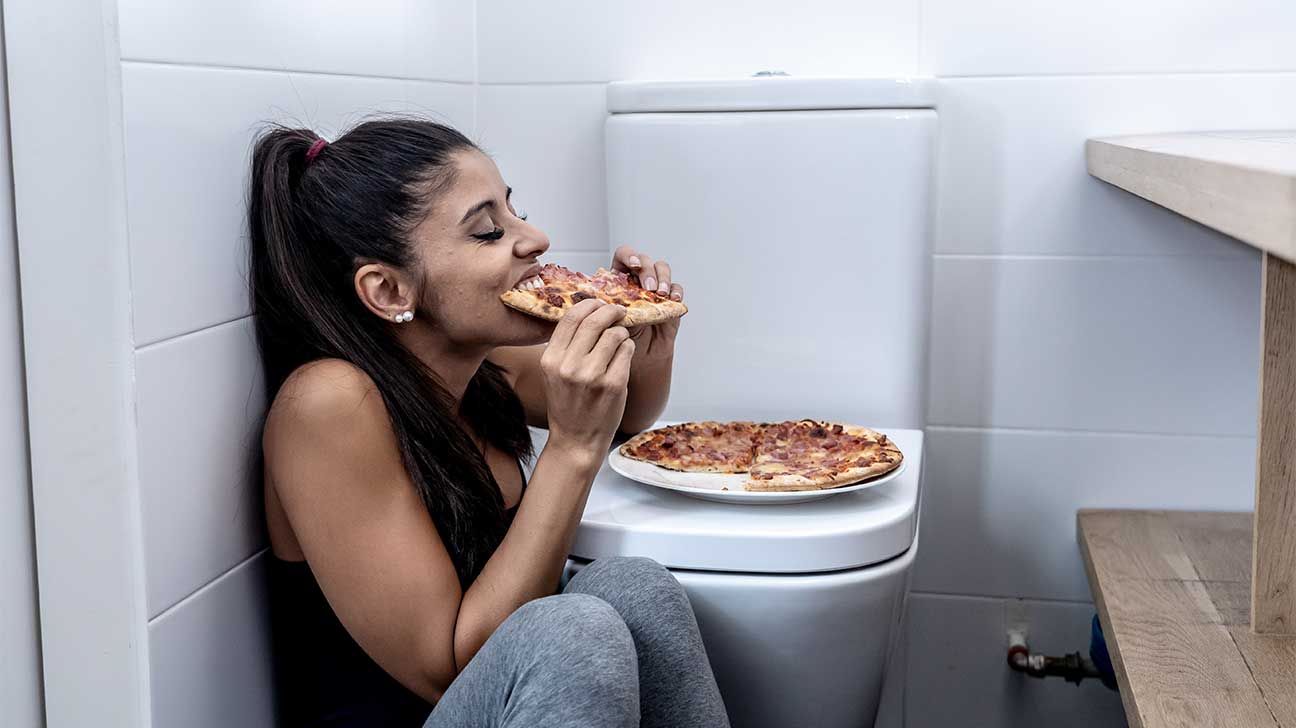 The general population tries different diets and exercises to reach a desirable body type. While some weight loss plans and diets may be relatively healthy, others have the potential to cause disordered eating.

Eating disorders are pervasive among younger generations in response to diet fads of the early 2000s and the introduction of social media, exacerbating body image issues such as body dysmorphia.

Some people might restrict eating to lose weight quickly; others may engage in binge eating to suppress feelings of depression, loneliness, or stress.

Combining unhealthy eating habits with alcohol or drug use has many negative consequences, including the development of co-occurring mental health disorders and addiction.

The presence of an eating disorder and a substance use disorder (SUD) is treated best with dual diagnosis treatment.

Below we’ll explore the link between these disorders and how they can be managed.

What Is An Eating Disorder?

An eating disorder is a mental illness involving dangerous eating behavior that can cause mental and physical harm. If left untreated, disordered eating can be life-threatening.

It’s normal to care about your body image, but people with an eating disorder may have a distorted view of their body and resort to extremes to lose weight.

The media often pressures women to look “desirable,” so they may resort to unnatural behaviors to achieve such steep demands.

These factors combined with other risk factors such as emotionally abusive homes, lack of healthy friendships, mental health issues, and low self-esteem may contribute to the development of an eating disorder.

An eating disorder can also involve overeating. Some people use food to self-medicate feelings of low self-esteem, depression, or anxiety.

Any of these disorders may also co-occur with body dysmorphic disorder (BDD), which is a condition in which a person is fixated on perceived negative aspects of their appearance.

According to researchers, 25% to 39% of people with anorexia also have BDD.

People with anorexia nervosa have a compulsion with looking and remaining skinny. Even if they are already thin, they may view themselves as overweight.

Some people with anorexia nervosa may partake in excessive exercise, abnormal restriction of food intake, or fasting for days.

Symptoms of anorexia include:

A person with bulimia may experience a loss of control over food intake (often binging privately) followed by a purge to rid their body of the food they just ate.

Purging may be reached through forced vomiting, abusing laxatives, or working out right after eating.

Symptoms of bulimia include:

Food can become a source of pleasure and comfort or a way to cope with feelings of anxiety, loneliness, and depression.

Symptoms of a binge eating disorder may include:

How Addiction And Eating Disorders Overlap

To offset the symptoms of an eating disorder, some may try other addictive behaviors, such as illicit drug abuse or alcohol use. Sometimes other anxiety disorders arise.

Drug abuse carries many risk factors, especially when coupled with an eating disorder. Substances may enable someone to continue unhealthy dieting behaviors.

For example, many prescription and illicit drugs suppress appetite and may worsen existing eating disorders (more on that soon).

On the other hand, someone may use an obsession with body image and exercising to excuse substance use. In some cases, binge eating may replace binging on drugs.

Both of these disorders involve compulsion-like behavior, but it manifests in different ways. However, the roots from where these behaviors grow are often the same.

There are many risk factors for drug addiction and eating disorders, including genetics, environment, emotional or physical trauma, or overall emotional health.

People have turned to medications or drugs to manage weight. Over-the-counter medicine, prescription medicine, and hard drugs are abused for weight loss.

Below we’ll explore the relationships between different drugs and eating disorders.

Appetite suppressant pills, usually called diet pills, have been around for years.

They work by suppressing how the body absorbs nutrients and reducing appetite. In the past, diet pills were prescribed to housewives feeling the pressure to stay thin and contained small amounts of amphetamine.

Today, these pills are branded by non-FDA-approved companies as “magic pills” used by celebrities to achieve desired figures and weight loss.

Advertisements show before and after photos of pill usage, but they usually don’t discuss the risks involved.

Some risks of using diet pills are:

Uppers are often used to invoke alertness and energy, but they may also be abused for their weight loss effects.

Many different stimulant drugs suppress appetite. All of these drugs carry harsh side effects.

The 8-ball and orange juice diet is an unhealthy diet of only orange juice and an 8-ball (3.5 grams) of cocaine. The idea behind this diet is to lose appetite and stay thin.

On its own, cocaine is a stimulant drug that can decrease appetite. Cocaine use attacks fat storage in the body and speeds up bodily processes, leading to unhealthy weight loss.

Known as a “designer drug,” ecstasy is typically taken by younger people before clubbing or raving. However, it can appeal to young men and women concerned about their body image.

Ecstasy has appetite-suppressing tendencies. Furthermore, a study shows that young women who took the drug were more likely to develop eating disorders.

Methamphetamine Use And Disordered Eating

Methamphetamine is a stimulant drug that creates hyperactivity and decreases sleep and appetite.

People often stay up for hours, days, or weeks on a binge, avoiding eating, showering, and other responsibilities.

Methamphetamine use may lead to extreme weight loss, muscle loss, tooth decay, skin lesions, and scratches on a person’s arms and legs.

Another class of drugs that causes appetite suppression is hallucinogens. Often thought of as “mind-expanding” substances, these drugs can cause weight loss.

Hallucinogens can induce nausea and vomiting. People who take magic mushrooms or LSD often report having stomach pains. These can lead to people not eating for hours while on the drug.

Signs Of Eating Disorders And Addiction

When people start to obsess over their image, food, or drugs, there may be many psychological, physical, and emotional signs.

As both are mental health disorders that involve compulsions, many symptoms overlap.

Co-occurring disorders create many unique challenges during the recovery period. However, dual diagnosis treatment was designed for people with multiple mental illnesses.

Some of the approaches used in comorbid disorder treatment are:

Many people benefit from inpatient or outpatient treatment when treating the symptoms of co-occurring substance misuse and eating disorders.

You or a loved one may need full-time care in a residential program to recover in a safe, substance-free environment. This is often helpful for people who struggle to resist cravings or live in an environment that’s unsupportive of recovery.

Others might benefit from an outpatient recovery program for eating disorders and substance addiction. Here, you can recover alongside other people with a dual diagnosis and return home each day to maintain your typical life responsibilities.

Our treatment center in Massachusetts can help you or a loved one find recovery.

At Spring Hill Recovery Center, our outpatient programs, detox center, and aftercare services can give you the strength you need to overcome substance abuse and eating disorders.

Reach out to us today to learn more about our treatment programs.