Injecting cocaine produces one of the faster and more intense cocaine highs available. However, the risks of this method include injection site trauma, increased risk of heart attack, cocaine-induced psychosis, and overdose. 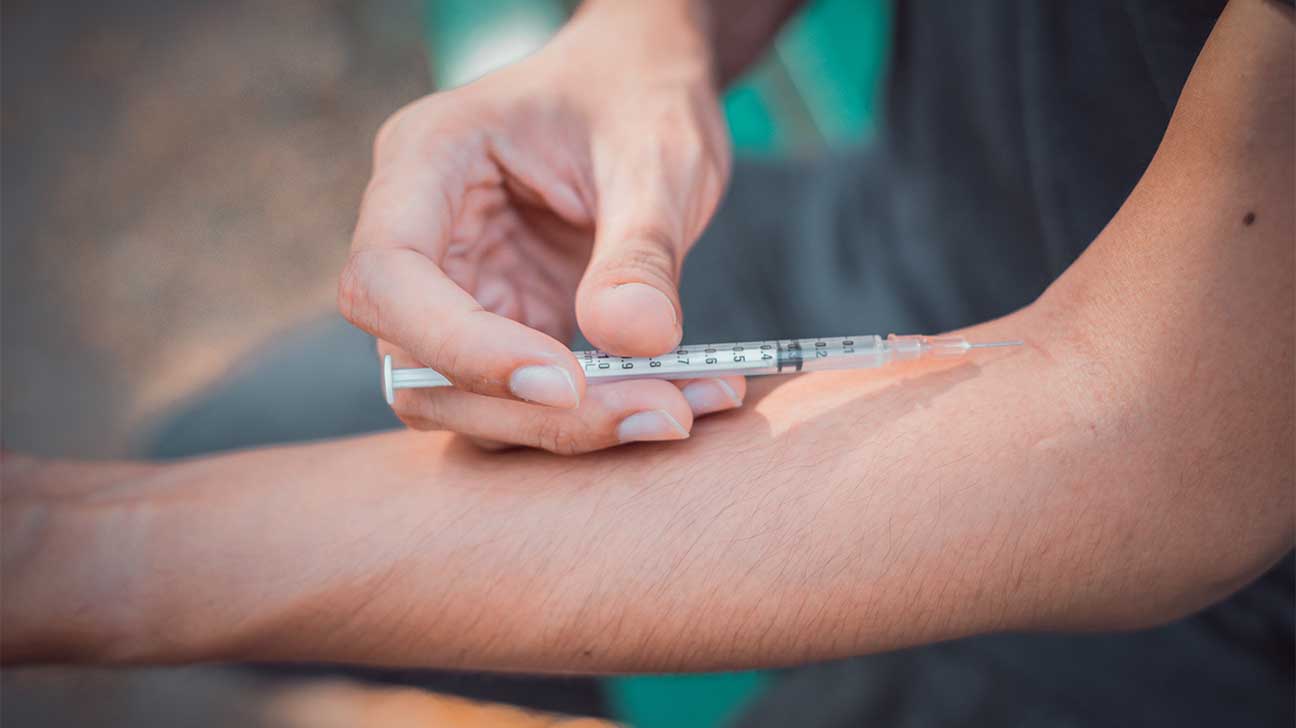 Of all of the methods of use for cocaine, injecting the drug produces one of the fastest and most intense highs. However, the risks associated with it are often incredibly dangerous.

This method is often utilized by people who have used cocaine habitually for a long period of time, rather than as the first use of the drug.

Read on to learn about the dangers of this type of cocaine abuse.

How And Why Is Cocaine Injected?

“Shooting” or injecting this drug is often done with powder cocaine that has been mixed into a liquid, usually water.

Other forms of cocaine, such as freebase or crack cocaine, cannot be injected. These are instead often ingested via snorting or smoking.

Once this white powder has been dissolved, it is administered via intravenous injection, subcutaneous injection (known as “skin-popping“), or intramuscular injection.

The resulting cocaine high is faster and more intense than other methods of use. Peak effects are felt within three minutes and often last for about five to 15 minutes total.

Short-Term Effects Of Intravenous Cocaine Use

The potential health risks and effects of cocaine injection can be incredibly varied.

Injecting cocaine can cause short-term effects, such as:

Long-Term Effects Of Intravenous Cocaine Use

With chronic cocaine use and drug addiction, the risk of significant physical and mental harm continues to grow. Cravings for the drug tend to increase, putting people at even greater risk.

The following are several important long-term risks of cocaine abuse via injection.

When injecting cocaine into the body, considerable damage can occur at the site of injection. Cocaine injection sites are often associated with scars, track marks, and other surface injuries.

However, even more damage may be under the surface. Collapsed veins, ulcers, abscesses, and other problems may occur.

There is a high risk of contracting illnesses and diseases with cocaine injections, such as HIV and hepatitis C. This is because they can be spread by shared or poorly sterilized needles.

However, there is an even higher risk associated with illness and the injection of this drug. Cocaine accelerates the body’s rate of infection for many diseases, including these.

Cocaine is a stimulant drug, which means it increases the rate at which most parts of the body function. This includes the heart, which can lead to many severe health problems.

Blood clots can form if the drug was not fully dissolved before injection. This often occurs if other substances are present, such as cocaine cutting agents or other drugs (polysubstance abuse).

The risk of heart attack greatly increases with cocaine use, especially via this method. There have been some reported cases of heart attacks and death from the first injection of cocaine.

A cocaine high occurs due to increased dopamine and other neurotransmitters in the brain. This can have significant changes on your mental health, even while you are not currently high.

Over time, these changes can manifest as behavioral health disorders, such as cocaine-induced psychosis. This can feature hallucinations, paranoia, and violence.

It can be very easy to accidentally inject more cocaine than intended. And since this method of use is so fast-acting, cocaine overdose is a common occurrence with injection.

The risk of overdose is increased even higher if engaging in polysubstance abuse.

As a stimulant, cocaine is often mixed with a depressant, such as alcohol or opioids. When mixed with heroin in particular, this combination is called “speedball.”

If an overdose for either drug is occurring, it can be difficult to tell, as the effects of these drugs can mask each other.

All people, regardless of whether they use drugs or not, inherently deserve to have their health and safety protected.

“Harm reduction” is the term for programs and services that attempt to reduce drug-related harm. This is often done via clean needle exchange services, or syringe services programs (SSPs).

People who use cocaine and other drugs can visit these locations and gain access to clean facilities and needles with which to use drugs, as well as vaccines and other forms of healthcare.

While counterintuitive to some people, these evidence-based harm reduction strategies minimize the negative consequences of drug use.

They do this by providing information about local treatment options. They have a good track record for providing what is essentially a gradual intervention for anyone who has an addiction.

Are you in need of addiction treatment for cocaine substance abuse, or is a loved one in need? Spring Hill Recovery Center can help.

At our facility, you can receive access to drug detox, participate in inpatient rehab or outpatient treatment, and will be provided with sober living services and aftercare.

Treatment is always an option. Call the addiction specialists at Spring Hill today to get started.