What Does Meth Look Like? What Color Is Meth?

Meth may appear in different colors, such as blue or pink. Likewise, it may have different forms, such as liquid meth or crystal meth. The appearance of meth is highly influenced by its additives and preparation process. 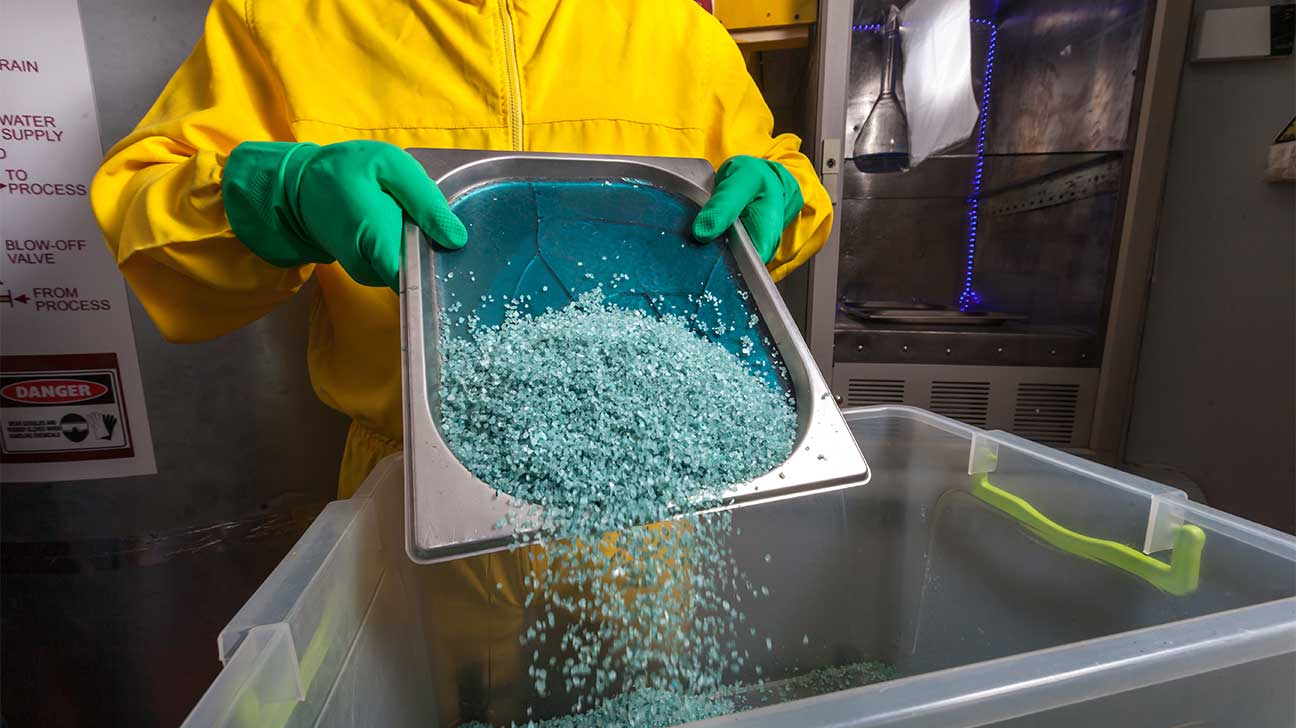 Methamphetamine (meth) is a highly addictive and highly dangerous stimulant drug that works by speeding up the central nervous system (CNS).

Because meth use can be deadly, one of the best things that loved ones can do is understand how to recognize meth.

Meth can be identified in several ways, including by appearance. While some forms of meth appear very distinct, others look similar to different drugs.

Additives And The Color Of Meth

In meth, one of the most recognizable factors is color. Meth may appear in a range of different colors, depending on its purity.

Because meth often contains additives, those additives can influence the color of a batch of meth.

Traditional meth appears in powder form, often stored in small plastic bags. It may appear clear, white, off-white, or tan, which can make meth look a lot like the opioid drug heroin.

However, there are several differences between meth and heroin, and some of those differences can impact meth’s color.

Often, powdered meth has a slightly orange or yellow tint due to additives and impurities.

Because meth is made with various household chemicals, this color can vary widely from one batch to the next.

Some batches of meth may be pink, often because of their primary ingredients.

Meth is made from decongestants such as ephedrine and pseudoephedrine. These pills are usually a deep red color, so some redness may find its way into batches of meth.

When this happens, the meth will take on a pale pink tint.

Another form of pink meth is called “strawberry quick meth,” which is meth mixed with strawberry-flavored drink powder.

A drug scare in 2007 made many people believe that meth dealers were creating flavored meth to appeal to children.

Although that rumor was unsubstantiated, flavored meth does exist. Meth is ordinarily a bitter-tasting substance, so flavored powders may be used to make the drug more palatable.

Likewise, other forms of bright pink meth have been seized by law enforcement agencies.

Blue meth is a form of methamphetamine that was inspired by the television show Breaking Bad.

In this show, the main character, Walter White, created a supposedly superior form of meth. Due to its extreme purity levels, White’s meth took on a bright blue color.

Chemists argue about whether it is indeed possible to produce pure blue meth, especially in the quantities that White produced.

Whether or not it is possible, most batches of pure meth are white or clear.

However, blue meth does exist and has been seized by law enforcement officials.

Generally, however, this meth gets its color from additives.

Sometimes, the color of meth changes based on how it was produced.

There are several methods used for making meth, and those methods use different ingredients to extract meth from its primary ingredients.

One method of meth production includes red phosphorus, a chemical that can be found in matchboxes, fertilizer, and several other items.

Red phosphorus can be used to separate meth from ephedrine and pseudoephedrine.

This chemical has a distinct red color, and it may add a slightly pink tint to a batch of meth.

White phosphorus is used, among other things, to create red phosphorus. It is more dangerous than the red version of the chemical.

Nevertheless, it is still sometimes used in meth production, and it has often been found in meth labs. Like red phosphorus, white phosphorus can extract meth from other ingredients.

Though it is called “white” phosphorus, its appearance is usually yellow and waxy. When a batch of meth has a yellow tint, that color may have come from white phosphorus.

Meth also has different textures, and these textures affect the appearance of meth.
In addition to the powder form mentioned above, crystal meth, liquid meth, and meth in pill form have their own distinct appearance.

Crystal methamphetamine (crystal meth) is a hardened, rock-like form of meth that is sold in small pieces.

Unlike the powder form, which is usually consumed via snorting meth, crystal meth is usually smoked.

Another common form of meth abuse is injection. However, before meth can be injected, it must first be turned into liquid meth.

To liquify meth, a person simply has to mix it into water. The substance dissolves easily and creates a brown or yellow color.

Sometimes, meth appears in pill form. Meth pills come from powdered meth, so their appearance can vary based on additives.

Does The Appearance Of Meth Change The Side Effects?

Generally, methamphetamine use will produce the same side effects and healthcare concerns, no matter the appearance of the drug.

All forms of meth impact the brain’s dopamine pathways, and they are all highly dangerous for this reason.

Some common health effects of meth include:

Different Forms Of Meth And Their Side Effects

The appearance of meth can have some impact on side effects. For example, the form of meth makes a difference.

Liquid meth, because it is usually injected, may cause collapsed veins, scarring, and a heightened risk for HIV.

Crystal meth often causes lung damage and throat irritation due to the fact that it is smoked.

The pill form of meth may cause damage to the stomach and intestines, as it must pass through the digestive system.

Finally, powdered meth can cause nasal irritation, including nosebleeds.

The Color Of Meth And Side Effects

The color of meth may have a slight impact on side effects because meth’s color depends largely on its additives.

The chemicals in meth come from many items that are not meant for human consumption. Consuming these items may cause significant harm.

For example, if meth gets its color from white phosphorus, it may cause nausea, vomiting, and stomach pains.

Even when meth gets its color from food additives, the color may cause a number of negative effects.

One example comes from a type of food dye called red dye #40, which many people are allergic to.

If this type of dye is used to create pink meth, some people may experience adverse effects.

Recovering from substance use disorders, including meth use, is a difficult process. Often, the idea of recovery is overwhelming.

However, having support and a treatment plan from an accredited rehab center can make the process far less daunting.

If you or a loved one need a treatment program to overcome drug use, contact Spring Hill Recovery Center today.